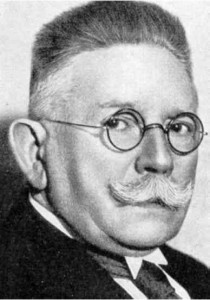 Alfred Hugenberg (1865-1951) was a German industrialist, press baron and nationalist politician. He became a prominent figure in the German National Peoples’ Party (DNVP) and was later associated with the National Socialists (NSDAP).

Hugenberg was born in Hanover, the son of a Prussian royal official. He studied law and economics before joining the civil service. He became involved in politics at an early age, founding two nationalist groups in the 1890s.

In the early 1900s, Hugenberg served in the Prussian finance ministry and sat on the board of industrial firm Krupp, Germany’s largest and wealthiest company. In 1909, he was elected chairman of the board, a position he held until the end of World War I.

During this period, Hugenberg diversified his interests, acquiring several newspapers and a film company. By 1919, he had become Germany’s most powerful press magnate. He would spend the next two decades using his newspapers to distribute nationalist viewpoints and propaganda.

Hugenberg joined the German National People’s Party (DNVP) in 1919. He was elected to the Reichstag the following year.

Under Hugenberg’s influence, the DNVP became more right-wing and reactionary. Hugenberg and his followers called for the abolition of the Weimar Republic, the restoration of the monarchy, the revival of militarism and the recapture of Germany’s colonial possessions.

This rising extremism saw hundreds of moderates abandon the DNVP. As a consequence, Hugenberg’s support grew and he was elected the party’s leader in 1928. As DNVP leader, Hugenberg attempted to replicate the growing authoritarianism in the Nazi movement but he lacked Adolf Hitler‘s oratorical skill and public appeal.

With the DNVP continuing to lose members in 1929-30, Hugenberg decided to throw his financial weight and press support behind Hitler and the NSDAP. The DNVP formally aligned itself with the Nazis in 1931.

Beneath the surface, however, Hugenberg and Hitler had little genuine trust or admiration for each other. Hugenberg refused to endorse Hitler’s bid for the presidency in 1932, though the two reconciled in late 1932.

Hugenberg served briefly as a minister in Hitler’s government, before being forced out in mid-1933. Hugenberg’s newspapers were later taken over by the Nazi propaganda corps. Hugenberg remained a member of the Reichstag until the end of World War II.

Alfred Hugenberg was arrested by the Allies after the war. He was not imprisoned or stripped of his assets, however. Hugenberg died in March 1951, aged 85.