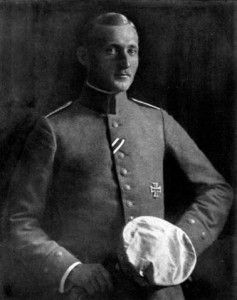 Albert Leo Schlageter (1894-1923) was a World War I veteran and Freikorps member who was executed for resisting the French occupation of the Ruhr. He became a martyr for right-wing nationalist groups, particularly the National Socialists (NSDAP).

Schlageter was born to a lower-middle-class Catholic family in southern Germany. On the outbreak of World War I, he immediately enlisted in the German army, signing on days before his 20th birthday.

During the war, Schlageter saw combat in several major battles including Ypres, the Somme, Verdun and Passchendaele. He twice received the Iron Cross and was promoted into commissioned ranks, serving as an artillery lieutenant.

After his discharge from the military in 1919, Schlageter enrolled to study economics in Freiburg but dropped out after a year. Like countless other young men, found himself jobless and aimless but agitated by the turbulent political events in Germany.

Schlageter was quickly drawn to the Freikorps, joining a unit in Upper Silesia in late 1919. He was involved in street battles with communists and support of the 1920 Kapp putsch.

In 1923, Schlageter participated in a series of raids and sabotage operations against French forces occupying the Ruhr. These raids, carried out with the tacit approval of the Weimar defence department, were designed to hinder or prevent French troops from moving supplies of coal and other materials out of Germany.

In March 1923, Schlageter and his brigade used dynamite to sabotage railway infrastructure north of Dusseldorf. He was betrayed to the French, possibly by his fellow Freikorps members, arrested and executed on May 26th.

Though Schlageter was a minor figure, his death was publicised and exploited by right-wing nationalist groups, particularly the NSDAP, with who he was briefly affiliated.

Schlageter was later immortalised by the Nazis, who held commemorations on the day of his execution and named military units after him.