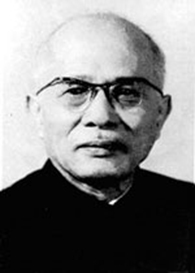 Ton Duc Thang was born to a poor peasant family in Long Xuyen, near the Mekong River. He trained as a mechanic, relocated to Saigon and enlisted in the French navy. Thang served abroad the French cruiser Waldeck-Rousseau during World War I. He later claimed to be involved in a pro-socialist mutiny aboard the ship, though records do not support this.

Thang returned to Saigon in 1920 and became involved in labour organisations. In 1929, he was arrested for subversive political activities and detained on the notorious prison island Con Son until 1945.

After his release Ton Duc Thang joined the Indochinese Communist Party (ICP) and became involved in several anti-French groups, though not the Viet Minh. Thang was active in southern Vietnam where he recruited for the Vietnamese Fatherland Front, a left-wing nationalist movement.

After the Geneva Accords he relocated to North Vietnam and became chairman of the National Assembly’s Standing Committee (1955). This brought him to the attention of Ho Chi Minh, who in 1960 recruited Thang to be his vice president.

When Ho died in September 1969, Thang assumed the presidency of North Vietnam. He was later president of the unified Socialist Republic of Vietnam, though this role was largely ceremonial. Thang was still president when he died in March 1980, aged 91.