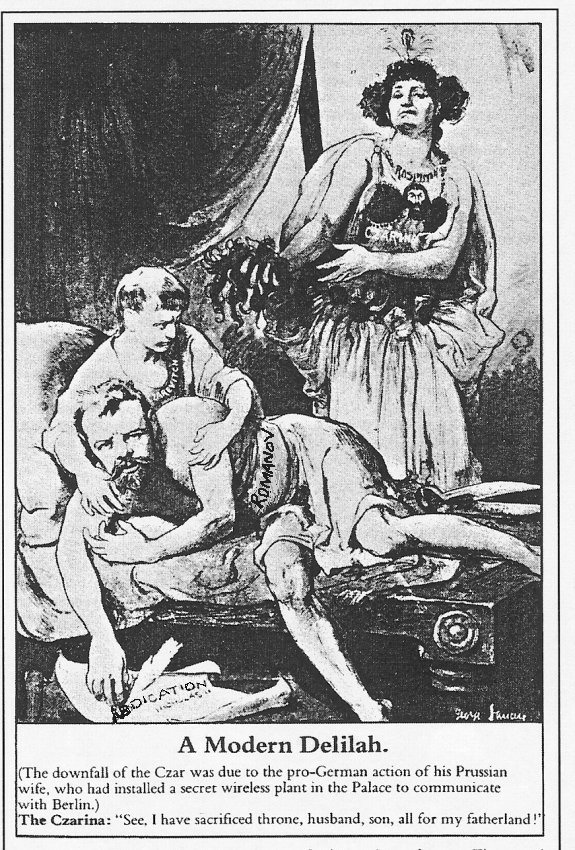 “Using both the source and your own ideas, explain how the actions and perceptions of Tsarina Alexandra contributed to the development of revolution in Russia to February 1917.” (6 marks)

“A number of culminating factors led to the February Revolution which saw the Tsar sign the instrument of abdication. Firstly was the Tsar’s grave mistake to take charge of the army at the front during WWI where he was seen as personally responsible for Russia’s defeats and symbolically leaving Petrograd in its time of need.The war was also exploited largely by the Bolsheviks who used propaganda to harness support for their cause as they depicted Russia as involved in an ‘Imperialist war’ which saw some soldiers lose moral at the front. Furthermore this allowed the Tsarina to remain in charge of political affairs back home which was to be devastating as she was seen as a ‘German spy’ because of her Germanic origin and a ‘Whore’ because of her dubious dealings with the healer Rasputin made the autocracy appear to be corrupt and caused a loss of moral in the Tsar’s primary support base, the gentry. Furthermore food and fuel inflation as a result of logistical problems saw discontent grow as unemployment and food shortages rose which came to a head when five workers were fired from the Putilov steel works. This saw a number of rolling strikes to begin which crippled Russia’s economy and forced the Tsar to sign the letter of abdication in February 1917.”

“Explain the usefulness of this source for understanding the causes of the Russian Revolution to February 1917. In your response, refer to other views and historical perspectives.” (10 marks)

“This source is somewhat useful in understanding the causes of the February Revolution. Its primary strengths lie in its acknowledgement of the Tsarina’s devastating effect on bringing about revolutionary sentiment through her unflinching belief in the upholding of autocracy and her German descent and dealings with Rasputin which lost the regime prestige. Its primary failings, however, are its source which appears to be pro-socialist and thus exaggerates the failings of the monarchy. It also places a lot of stress on the importance of the Tsarina, which , while important was not the only factor which led to the demise of the Romanov regime as the economic crisis is considered by many historians as the primary motivator for the workers uprisings. It also, in contrast to Lenin’s accounts does not portray the effect of the Bolsheviks’ propaganda on the revolutionary situation in Russia, as he claims the propaganda exposing WWI (1914-1918) as an “imperialist war” was the primary reason for the Tsar’s loss of support of the soldiers which in turn did not suppress the uprisings in February 1917. Thus while this source has merit it by no means presents a complete perspective of why the Tsar fell in February.”

Both responses were quite strong. The opening sentence of the first response needs stronger focus on the question (perceptions of Tsarina Alexandra), e.g. “Russia’s involvement in World War I intensified hatred of the tsarina and negative propaganda, which further undermined tsarist authority.” The rest of the response contained relevant information and good depth, though it could have been structured and organised more efficiently.

The second question asks for some critical evaluation of the source. The student makes an error by suggesting the source is “pro-socialist”. The cartoon is actually Allied wartime propaganda, which seeks to attribute the February Revolution mostly or entirely to the tsarina, Rasputin and German influences. The student correctly notes that the source “places a lot of stress on the importance of the tsarina which, while important, was not the only factor” leading to revolution. The source also likens Nicholas II to the mythical strongman Samson, when his leadership was neither strong nor wise. In the end the tsar’s own mismanagement and lack of vision proved more fatal than the actions of his wife. Together these responses would score in the region of 13-14 out of 16.