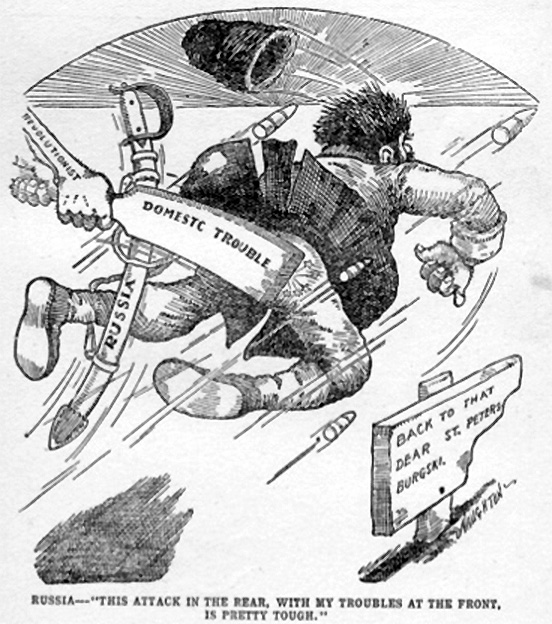 “Using both the source and your own ideas, explain the causes of revolutionary sentiment in Russia, up to and including 1905.” (6 marks)

“The culmination of the prolonged grievances of the proletariat led to the events of Bloody Sunday (Jan 9th 1905), marking the beginning of the breakdown of trust between the tsar and his people, as well as sparking a series of strikes across Russia. The defeat at the Battle of Tsushima (May 1905) contributed to the mutiny of Battleship Potemkin (July 1905) and the troops taking control of parts of the Trans-Siberian Railway (September 1905), signifying that the tsar could potentially lose the support of his military. The emergence of unions such as the Establishment of Union by Miliukov (May 1905), the All-Russian Union of Peasants (June 1905) and Trotsky’s St Petersburg Soviet (October 1905) gave peasants and workers formal representation. Finally, nationalistic assertion by non-Russian minorities, Jewish press for equal rights and peasant revolts throughout 1905 as well as the general strikes of October 1905 led to the publication of the October Manifesto (October 1905).”

“Explain the usefulness of this graphic for understanding how tsarism survived the crisis in 1905. In your response, refer to other views and historical perspectives.” (10 marks)

“The graphic is to some extent correct in depicting tsarism as a regime in flight in 1905. However, despite having to make concessions, the tsarist regime was successful in holding on to power and ultimately survived the 1905 revolution. Indeed, its entrance into the Russo-Japanese War (1904-5) was disastrous in its defeat and in the mutinies of the army. However, both the mutiny of the Battleship Potemkin (July 1905) and the army troops (September 1905) were successfully put down. The concession made in the October Manifesto (October 1905) was, according to Malone, only a strategy made to deal with present demands and not made out of conviction. The Fundamental State Laws (23rd April 1906) later reasserted the tsar’s authority and removed the sharing of power previously offered. Although faced with radical deputies in the Duma, the tsar exerted control and was able to close both, the first lasting only from April–July 1906 and the second February–June 1907, after which he changed the laws to vote and elect deputies to narrow the mandate (to elect a deputy required only 230 landowner votes, but 60,000 peasant votes and 125,000 worker votes). As Leon Trotsky states, “although with a few broken ribs, Tsarism came out of the experience of 1905 alive and strong enough”. It is clear that the concessions made in October 1905 were meaningless. By 1907 the tsar had reasserted his authority and hence the autocracy.”

Firstly, failing to prepare for questions on the 1905 Revolution or not understanding the importance of this revolution is a common problem among VCE History (Revolutions) students. If you have studied Russia then do not neglect this part of the Area of Study.

Both answers here suggest a strong understanding of the challenges and threats to tsarism in 1905. The student’s first response makes one notable error: it fails to mention the Russo-Japanese War, which is both a cause of the 1905 Revolution and the focus of the source. (He/she does mention the Russo-Japanese War in the 10-mark question, however by this question the focus is on the tsarist response to 1905, not its causes.) It’s worth explaining that the 1905 revolution was the product of both long term changes, such as industrialisation and social inequality, and the short term effects of the war with Japan, such as rising prices and the impact on the industrial working class. Another idea suggested by the source is that its defeat in 1905 suggested military weakness and a loss of prestige for the tsar.

The student’s second response had better focus. Tsarism survived 1905 through a combination of false or insincere promises, the divided and shambolic nature of the revolutionary movement, the actions of Witte and Stolypin, the passing of the Fundamental Laws and the subsequent manipulation of the Duma. Despite its defeat abroad, the tsarist regime remained strong enough to enforce its will at home. The peasantry was not organised or motivated enough to stand against the tsar, while radicals like the Bolsheviks were mostly in exile. This student response addresses most of those points. it would score in the regime of 13-15 out of 16.