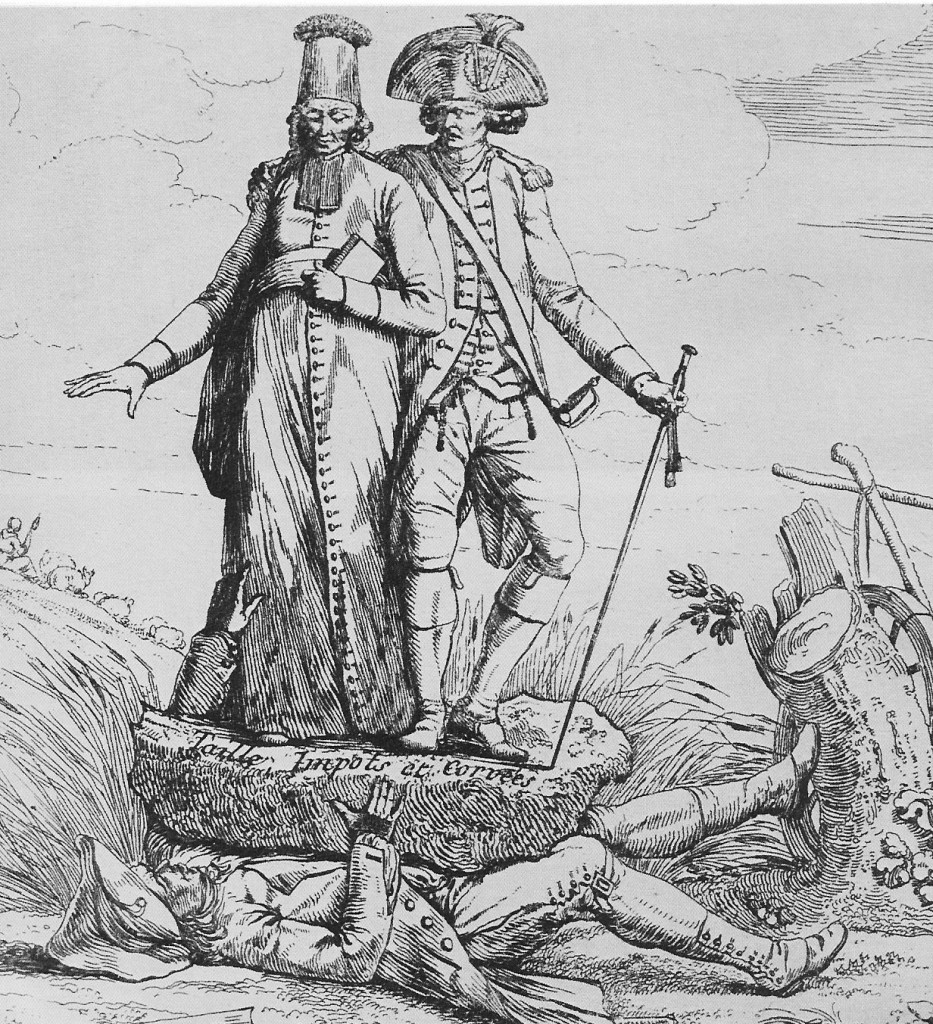 “With reference to the source and using your own ideas, explain why taxation became a key cause of revolutionary sentiment and events in France to August 1789.” (6 marks)

“France’s fiscal crisis, resulting from Necker’s financing of the American war (1778-83) almost entirely with loans (91% by loans), provoked an “escalating and unresolvable constitutional conflict” (Bossenga), inciting revolutionary action and the abolition of feudalism (Aug 4th 1789). Firstly, Calone transformed the regressive nature of French taxation into a political issue by calling the Assembly of Notables (Feb 22nd 1787), precipitating the Parisian liberal bourgeoisie and workers’ rising and unmet expectations of fiscal reform. Secondly, fiscal debate was the basis upon which Brienne called the Paris Parlement (July 1787), whose remonstrances underpinned the growing popular movement. Thirdly, the fiscal stalemate between Louis and the notables engendered the drafting of the cahiers (Feb 1789) and Estates General (May 5th 1789) in which the Third Estate sought to achieve power proportionate to its numerical size. This led to the formation of the National Assembly (June 17th 1789) and subsequent expression of Abbe Sieyes’ ideals of national sovereignty at the Tennis Court Oath (June 20th 1789), legitimising the National Assembly.”

“Explain the usefulness of this representation in presenting the tensions and conflicts in that contributed to the development of the French Revolution to August 4th 1789. In your response, refer to different perspectives of the revolution.” (10 marks)

“The graphic is useful to the extent that it provides a reliable view of some of the tensions and conflicts that led to the revolution. The graphic accurately depicts the fiscal tensions and burden of taxes (taille, impots, corvee) on the Third Estate and their effect on heightened social tensions, however, there is no mention of the rise of the aristocracy at the Assembly of Notables (Feb 22nd 1787) and with the Paris Parlement’s remonstrances (July 1787), subtracting from its worth as a reliable source. Marxist historian Soboul contends that “the aristocratic revolt and subsequent paralysis of the monarchy led to the revolution”(Soboul), a typical Marxist view. Further, the graphic fails to depict the bourgeoisie revolt at the Estates General (May 5th 1789) and subsequent formation of the National Assembly (June 17th 1789) and Tennis Court Oath (June 20th 1789), which Lefebvre would assert is a major flaw due to his Marxist perception that “it was the rise of the bourgeoisie that ultimately led to the revolution”. The representation does not sure popular action such as the storming of the Bastille (July 14th 1789) which gave the Parisian crowd agency as a revolutionary movement. Revisionist historians such as Schama, Doyle and Bossenga would reject the Marxist view, contending that despite its flaws, the representation is reliable. The main premise of the source is typical of the revisionist view that “the economic crisis provoked escalating and unresolved constitutional conflict that led to the revolution”. (Bossenga)

Both responses are indicative of high level, high scoring answers. They demonstrate a strong knowledge of both the taxation crisis and the chronology of the revolution to August 1789. Both responses are well organised and use language that is clear and sophisticated. If there is an obvious weakness it is with the first response, which fails to discuss the main premise of the source. This source, like the various ‘burden of the Third Estate’ images, focuses on structural inequalities and the disproportionate amount of taxation levied on the Third Estate. The student’s six-mark answer does not provide any insight into this, other than mentioning that France’s taxation regime was “regressive”. Instead, the response heads straight into a discussion about the events of 1787-89. Always be mindful of the wording of the question (“With reference to the source…”) and remember to link back to the ideas within the source. This image provides a fairly common perspective, i.e. that the revolution was caused by inequitable taxation. It is a view sympathetic to the Third Estate. Use that to explore other causes and perspectives. These answers would score in the region of 14-16 out of 16.