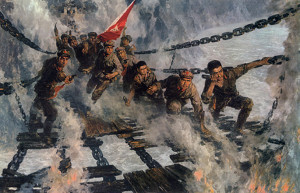 “Using both the source and your own ideas, explain the threats and dangers faced by the Chinese Communist Party (CCP) between 1927 and 1936.” (6 marks)

“From the onset of the Long March, the breakout from Jiangxi (16th October 1934), the Chinese Communist Party (CCP) was constantly harassed by the Guomindang soldiers (GMD). All together the CCP lost over 85% of its forces in battles such as the Battle of Xiang River (25th Nov to 3rd Dec) where 30,000 soldiers were killed due to the unsuccessful tactics of open warfare. Furthermore, the CCP had decided, under the difficult circumstances left by the Battle of Xiang River, at the Zunyi Conference (Jan 7th) where Mao, supported by Zhou Enlai, became the leader of the CCP. This signalled the break from orthodox Marxism. Thirdly, the crossing of the high grasslands (August 1935) took a tremendous toll on the CCP’s forces. In the seven days without food over 32,000 Red Army soldiers died from starvation. Lastly the sheer size of the Long March, compounded with the evasive actions which involved random paths in different directions and also the constant harassment by the GMD soldiers left the CCP with 5000 out of 100,000 men and women alive.”

“Explain the usefulness of this source for understanding the importance of the Long March in the course of the Chinese Revolution. In your response, refer to other views and historical perspectives.” (10 marks)

“This extract is useful for understanding how important the Long March was for the success of the CCP. The actual success of the campaign is highly debated. Maurice Meisner (a revisionist historian) would argue that “such a military loss… was hardly a victory”. But Edgar Snow (a journalist who supported Marxist views of this event) would debate that it was a success and say “it was a triumph of will under extreme duress”. This extract’s strengths lie with the depiction of the heroic crossing of the bridge which inspired people in the years to come. Most historians agree that the Long March was important because it elevated Mao to leaders at the Zunyi Conference. Meisner even concedes that “Mao was the prophet that led the survivors out of the wilderness”. This extract’s primary weakness lie in the fact that there is no visible presence of GMD soldiers in the picture. Furthermore, the event portrayed here is heavily debated, Jung Chang and John Halliday argue vehemently that it was highly exaggerated and that there were no GMD soldiers for miles.”

Both answers are focused on the question and contain some useful and relevant points. They could, however, be better structured and organised, to provide a sharper response to the question. The 6-mark question asks about “threats and dangers” to the CCP between 1927 and 1936. Clearly the largest threat was Chiang Kai-shek and the Nationalists, so events such as the Shanghai Massacre (April 1927) and Chiang’s Encirclement Campaigns (1931-35) should be mentioned. The dangers encountered on the Long March should also be mentioned, as the student has done well here.

The 10-mark question asks for a critical evaluation of the Long March and its role in the Chinese Revolution. This is a common exam question. The student here has provided a series of prepared statements, rather than a cogent answer. It is important to begin with a reference to the source, e.g. “The image has limited value as a historical source because it is communist propaganda that glorifies the Red Army and possibly misrepresents the crossing of the Dadu River”. The source aligns with the story of the Long March promoted by the CCP: that it was an act of tremendous bravery and endurance, a great victory, a “seeding machine” according to Mao. It should not be difficult to summarise historiographical views about the Long March. Mao, Snow and Hu Qiaomu praised and glorified it as the turning point of the revolution. Jung Chang, Hsu and others have condemned it as deadly failure, overseen by Mao. Revisionists like Sun Shuyun have taken a more balanced and rigorous view, which has shattered the myth of the ‘noble Red Army’.

This student’s responses would score in the region of 13-14 out of 16.