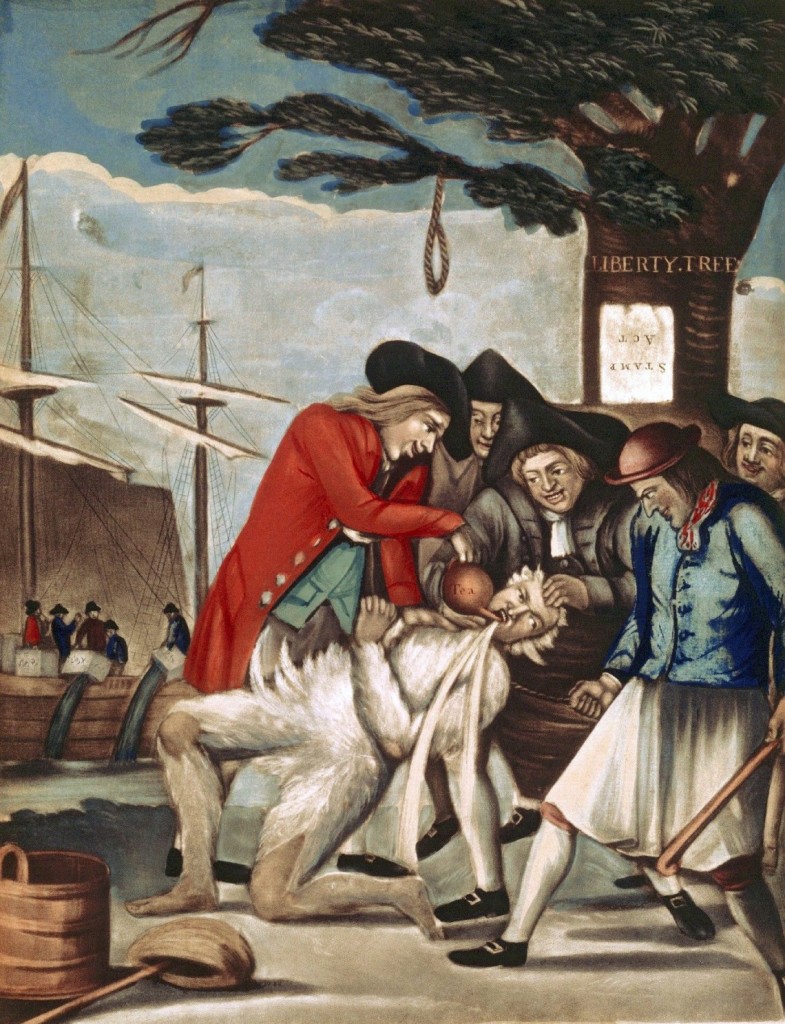 “Using both the source and your own ideas, explain the origins of revolutionary sentiment in colonial America to July 1776.” (6 marks)

“This British cartoon depicts the Bostonians as unruly and cruel. It supports British sovereignty and expresses the idea that the ‘dangerous’ Americans are unable to govern themselves. The event shown in the background appears to be the Boston Tea Party (1773) which was ultimately a result of revenue taxes implemented by the British (in response to war debt), in particular the Tea Act of 1773. The British parliament responded to this uprising with the Coercive Acts (1774) and this, causing more outrage led to further protests and attacks on the British and Loyalists (hence the tarring and feathering). The colonists simply wants liberty and ‘no taxation without representation’, whereas the British were seeking revenge, revenue and controlled colonies.”

“Explain the usefulness of this graphic for understanding the role violence and intimidation played in the American Revolution before July 1776. In your response, refer to other views and historical perspectives.” (10 marks)

“This cartoon portrays a useful depiction to the way the Americans responded to British taxation and oppression in the 1760s and 1770s. Beginning with the Royal Proclamation in 1763, animosity was demonstrated within the colonies and continued to increase in the following years, climaxing in the Boston Tea Party (1773) and the fighting in Lexington and Concord (1775). This British cartoon is slightly exaggerated but it is truthful in its content, for events such as tarring and feathering did occur in the colonies. Essentially it is apparent that the cartoon is presenting the American Revolution as a radical social movement and liberal historians such as Wood would agree that these “intensified forces” the revolutionaries used were fundamentally based on New World ideas of equality, egalitarianism, actual representation and liberty.”

Both responses are generally accurate and contain some good ideas. Both are simplistic, however, and could explore both the source and its context further. The first response correctly identifies the source as British and refers to the Tea Act and the Boston Tea Party. It also acknowledges that the source depicts the Bostonians in an unfavourable light, using mob action, intimidation and violence to oppose British policies. More background to the Tea Act and British revenue policies could have been provided. The actions of Boston radicals such as Samuel Adams, Paul Revere, the Loyal Nine and the Sons of Liberty could also be mentioned.

The second question asks about the role violence and intimidation played in the development of the American Revolution. Clearly it played some part, particularly in Boston and New York. Good answers might acknowledge some violent incidents, such as ‘tarring and featherings’, attacks on Thomas Hutchinson and Andrew Oliver and the mob action that led to the Boston Massacre. In reality, however, violence and intimidation were only one casual factor of the American Revolution. It was largely driven by a political movement driven by ideology, rhetoric, debate and objections to British policy. This provides a good segue into a summary of historians’ perspectives of the revolution. Zinn, Jennings, Nash and others might interpret the violent actions of the Boston radicals as representative of class grievances. Progressives like Beard and Becker might suggest that resistance to the Tea Act was fuelled by the self interest of colonial merchants.

Together these responses would likely score in the range 10-11 out of 16.