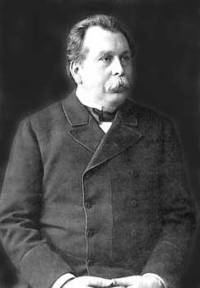 Vyacheslav von Plehve (1846-1904) was a Russian politician and bureaucrat who served under both Alexander III and Nicholas II. He is known for heading police and security departments, overseeing the expansion of the Okhrana and persecuting revolutionary groups.

Born in Meshchovsk, south-west of Moscow, Plehve was the son of a schoolteacher of German ancestry. He was raised there and later in Warsaw, where the young Plehve excelled in his studies. He returned to Moscow to study law, graduating at age 21.

Like many of his fellow graduates, Plehve entered government service. He spent 15 years in the Ministry of Justice, ascending through the ranks of the imperial bureaucracy. In 1880, he was appointed to investigate a bombing incident at the Winter Palace, his report gaining the attention of the royal family.

Plehve acted as chief prosecutor after the assassination of Alexander II in March 1881. The new tsar, Alexander III, appointed him police director, a role that included command of the Okhrana. Plehve would spend the next two decades implementing reactionary policies like ‘Russification’, working to suppress or control unions, weakening the zemstvos and pursuing radical political groups and revolutionaries.

Plehve was hated by political radicals and became the target of threats on his life. He survived three assassination attempts before a bomb hurled into his carriage by Egor Sozonov, a Socialist-Revolutionary, claimed Plehve’s life in July 1904.

Citation information
Title: “Vyacheslav von Plehve”
Authors: Jennifer Llewellyn, Michael McConnell, Steve Thompson
Publisher: Alpha History
URL: https://alphahistory.com/russianrevolution/vyacheslav-von-plehve/
Date published: May 19, 2019
Date accessed: November 23, 2022
Copyright: The content on this page may not be republished without our express permission. For more information on usage, please refer to our Terms of Use.