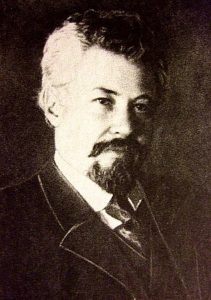 Viktor Chernov (1873-1952) was a Russian socialist ideologue and political leader, best known as the ideological leader of the Socialist-Revolutionary party or SRs. Chernov later served briefly as chairman of the ill-fated Constituent Assembly.

Chernov was born in Samara, the son of a peasant turned bureaucrat. He was educated in Saratov before relocating to Moscow to study law. He became involved in political groups in both locations.

Chernov’s involvement in political radicalism increased during the 1890s. His political views were populist rather than Marxist. He rejected the Social Democrats (SDs) and their platform, calling for a less theoretical form of socialism that could be applied to Russia’s unique conditions.

After periods in exile, Chernov returned to Russia and joined what became known as the Socialist-Revolutionary party. He helped developed the party’s ideological platform, moving it away from violence and anarchism and towards policy, organisation and mobilisation.

Chernov participated in the 1905 Revolution and the following year was elected to the second State Duma. In 1917, he served as the Provisional Government‘s agriculture minister under Alexander Kerensky.

Viktor Chernov is probably best known as the chairman of the doomed Constituent Assembly, which met the first time on January 18th and was dissolved by Bolshevik troops on the following day. After this, he and other Constituent Assembly deputies relocated to Chernov’s native Samara and established an anti-Bolshevik government.

Chernov later fled to the United States via Europe. He died in New York in April 1952.