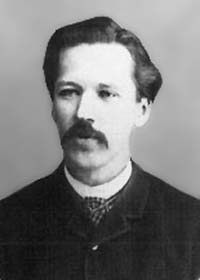 Sergei Zubatov (1864-1917) was a Russian official who became an important tsarist security commander, heading the Okhrana for several years. Though a political moderate who believed in the need for social reform as well as security, he was despised by revolutionaries for his effectiveness.

Zubatov was born in Moscow, the son of a low-ranking military officer turned estate manager. He was educated at secondary level but showed a revolutionary and argumentative spirit and was expelled before graduating.

Originally a populist sympathiser, Zubatov was recruited as a tsarist informer during the mid-1880s. He continued to mix with revolutionaries while providing information to Okhrana agents in Moscow. When Zubatov was exposed in 1888, he chose to join the Okhrana himself.

By the mid-1890s, Zubatov was himself in command of the Moscow Okhrana. Unlike other security chiefs, he did not believe revolutionaries could be defeated with repression and brute force alone. Information, intelligence and the mobilisation of ideas, Zubatov believed, were better weapons.

Zubatov began the organisation of police-controlled workers’ unions, an attempt to capture the middle ground, manage dissent and encourage sympathy and support for the government. The first of these groups began in Moscow in 1901 and their number soon grew.

Though popular with thousands of workers, these groups were attacked by left-wing revolutionaries, who dubbed them “police socialism” or “zubatovschina” after their founder.

By 1902, Zubatov had been given command of the St Petersburg police in order to suppress revolutionary movements. Privately, he argued that crushing revolution was impossible without some measure of social reform. This brought Zubatov into conflict with the conservative interior minister, Vyacheslav von Plehve, who eventually dismissed him.

After Plehve’s assassination in July 1904, Zubatov was invited to return to public service but he declined the offer. He instead wrote numerous articles on political matters before slipping into retirement.

Zubatov shot himself in March 1917, aged 52, after hearing the news of Nicholas II‘s abdication.

Citation information
Title: “Sergei Zubatov”
Authors: Jennifer Llewellyn, Steve Thompson
Publisher: Alpha History
URL: https://alphahistory.com/russianrevolution/sergei-zubatov/
Date published: May 18, 2019
Date accessed: December 03, 2022
Copyright: The content on this page may not be republished without our express permission. For more information on usage, please refer to our Terms of Use.