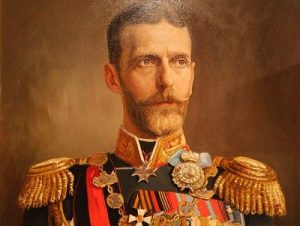 Sergei Alexandrovich was a Russian grand duke and both the uncle and brother-in-law of Nicholas II. He served for almost 15 years as the governor-general of Moscow until becoming a victim of terrorist violence during the 1905 Revolution.

Grand Duke Sergei Alexandrovich Romanov was born in the royal palace at Tsarskoye Selo, the seventh child and fifth son of Tsar Alexander II. He travelled widely as a boy, received a broad education and came to speak four languages in addition to Russian.

Like other younger royal sons, Alexandrovich was steered towards military service. He joined the Imperial Army and led infantry units during the Russo-Turkish War (1877-78). After the assassination of his father in 1881, Alexandrovich returned to command an elite regiment near St Petersburg.

Contemporary reports suggest that Alexandrovich was tall and physically handsome, yet shy, poorly tempered and socially awkward. He had politically conservative views but as a military commander embraced progressive reforms, such as the abolition of corporate punishment.

Alexandrovich married Elisabeth of Hesse, the elder sister of the future Tsarina Alexandra, in June 1884. The couple were devoted to each other but never had children of their own. Alexandrovich’s behaviour occasionally drew lurid commentary and many historians now believe he was homosexual or bisexual.

In 1891, Alexandrovich was appointed governor-general of Moscow. One of his first acts was using the military garrison to expel 20,000 Jews from the city at gunpoint. Alexandrovich was also blamed for the deaths of around 2,000 people in the Khodynka Field stampede (1896).

Unpopular with the people due to his hardline political conservatism, Sergei Alexandrovich was assassinated in Moscow in February 1905. A powerful bomb tossed into his carriage literally blew the Grand Duke to pieces. His wife later attended the scene and helped recover pieces of his body.

Citation information
Title: “Sergei Alexandrovich”
Authors: Jennifer Llewellyn, Michael McConnell, Steve Thompson
Publisher: Alpha History
URL: https://alphahistory.com/russianrevolution/sergei-alexandrovich/
Date published: May 16, 2019
Date accessed: July 04, 2022
Copyright: The content on this page may not be republished without our express permission. For more information on usage, please refer to our Terms of Use.