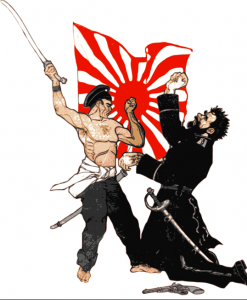 The Russo-Japanese War (1904-5) was a brief conflict between the Russian Empire and Japan. The war began with disputes over influence and territory in south-east Asia, sparked by competition between Russian imperialism and Japanese expansion. The conflict ended with an embarrassing defeat for Russia that exposed significant military, economic and administrative problems in the tsarist regime.

The war with Japan was triggered by Tsar Nicholas II and his desire to expand the Russian empire in Asia. Nicholas entered the war overconfident and haughty. He viewed Japan an easy foe, a semi-feudal nation of barefooted samurai and daimyo, incapable of matching Russia’s military might.

This was a gross underestimation of the Japanese and their industrial and military development, which for several decades had outpaced Russia’s own. Within 18 months, Russian forces had been besieged and defeated, her ageing Baltic navy humiliated and the prestige of the empire humiliated on the world stage.

The war would also have a significant impact on the Russian economy. This, along with the zealous ambitious and blundering of the tsarist regime, fanned the flames of revolution in 1905.

Like his cousin, the German Kaiser, Nicholas II equated imperial expansion with successful leadership. The Tsar had a strong interest in acquiring new territory and expanding the Russian empire. He was particularly interested in consolidating and increasing Russia’s influence in Asia.

The Russians began constructing a branch from the Trans-Siberian railway through Manchuria to Port Arthur. This infrastructure allowed St Petersburg to increase its military and economic presence in Port Arthur specifically and northern China generally.

This growing Russian presence challenged Japanese leaders who also had strong imperial ambitions in Korea and northern China. Japan had controlled the Korean peninsula since the mid-1890s – but as Russian traders moved into Manchuria in numbers, they began to encroach on Japanese interests.

The Japanese government, supported by its British allies, attempted to resolve this dispute and avoid war by initiating negotiations with St Petersburg. The upshot of these negotiations was that Japan promised to recognise Russian autonomy in Manchuria, provided the Russians recognised Japanese control of Korea.

Russian diplomats, confident that Japan would not go to war, attempted to stall the negotiations, then insisted the Japanese minimise their military presence in Korea. The negotiations eventually collapsed and, in early 1904, the two countries severed diplomatic ties.

Bolstered by support from the British, Japan declared war on Russia on February 8th 1904. Three hours earlier, Japanese forces launched a surprise assault on the Russian garrison at Port Arthur.

Despite this attack, the tsar and most of his advisors remained confident of victory. Japan had only opened its borders to Western powers in the mid-1800s. It had made considerable advances in industrialisation and Western military techniques – but few believed it could defeat a major European power like Russia.

The propaganda of the day ridiculed the Japanese military for its lack of size and lack of firepower, criticisms that were partly justified. But Japan also had several advantages. Its small navy was equipped with several British-supplied warships of recent construction, while Russia’s fleet was larger but significantly older.

Japanese culture was intensely militaristic. Its generals and admirals were trained in both ancient and modern Western strategy and tactics; they were promoted on merit and achievement rather than social status. Unlike the Russians, the Japanese respected the enemy and were acutely aware of his strengths and weaknesses.

By August 1904, the Japanese had encircled and laid siege to Port Arthur. More than 100,000 Japanese soldiers surrounded the port city, digging kilometres of trenches and attacking the city’s fortifications with gunfire, artillery, mortars, mines and tunnels.

The siege lasted for five months before Port Arthur eventually fell to the Japanese, a week before the ‘Bloody Sunday’ shootings in St Petersburg. Around 6,000 Russian personnel had been killed and around four times this number were wounded. The Japanese also took around 20,000 Russians as prisoners-of-war. The loss of Port Arthur, Russia’s only military stronghold in the region, was both strategically decisive and politically humiliating.

In September 1904, several weeks into the siege, St Petersburg ordered the deployment of its Baltic Fleet to Asia. Its commanders were ordered to engage the Japanese and relieve Port Arthur. A total of 28 Russian ships left Europe in October. They embarked on a voyage that took eight months and was riddled with comic errors.

Days after leaving the Baltic, Russian ships fired on British fishing boats in the North Sea, thinking they might be Japanese warships in disguise. Three British fishermen were killed and the Dogger Bank incident, as it became known, almost drew London into the war. Later, off the coast of Africa, the Russians shelled one of their own ships by accident during test firing.

Importantly, all of this took place in full view. The world press published regular accounts of the Russian Baltic fleet’s progress, tracking it down the African coast and across the Indian Ocean. The Japanese Imperial Navy was fully aware of the fleet’s location, the number of ships and their likely course. They had months to plan their response.

When the Russian ships arrived in the Straits of Tsushima in May 1905, they were ambushed by a smaller but faster Japanese fleet. Almost the entire Russian fleet was either sunk or captured.

This disastrous defeat occurred in front of an audience of foreign dignitaries, admirals and generals who came to observe the much-anticipated battle between ‘old Europe’ and ‘new Asia’.

The embarrassments of Port Arthur and Tsushima, along with the growing domestic unrest of 1905, forced Nicholas II’s government to seek peace terms from the Japanese. The Russian peace negotiators were led by Sergei Witte, who managed to secure reasonable terms, despite Russia’s weak position.

The Treaty of Portsmouth, signed in September 1905, saw Russia cede control of Port Arthur to the Japanese and acknowledge Japan’s authority over Korea. This defeat eroded the Russian Empire’s military prestige and undermined the credibility of the tsar.

The Russo-Japanese War also sharpened the impact of the economic recession gripping Russia. The tsar’s government increased military spending by 50 per cent at a time when production levels and government revenues were both falling. Military-related industries also increased pressure on their workers, which heightened discontents that had been festering for some years.

A writer’s view:
“At the outset, the government presented the war as a religious struggle, with Serafim as its patron saint. Officers setting out for the front made pilgrimages to Sarov, and parents of soldiers travelled to Sarov to beg the protection of Serafim. Priests blessed the troops with his icon. The grand duchess Elizabeth Fedorovna carried the relics of Serafim with her when she attended to the war casualties in Moscow’s military hospitals.”
Boris Pasternak

1. The Russo-Japanese War erupted in 1904, the two nations going to war over territory and colonial rights in Asia, particularly Manchuria and Korea.

3. Japan initiated the war with a surprise attack on the coastal city of Port Arthur which was later captured after a five-month siege.

4. In May 1905, almost the entire Russian Baltic Fleet was captured or destroyed at the Battle of Tsushima, a disaster that unfolded in view of the world.

5. Russia was forced to negotiate peace terms, which resulted in the Treaty of Portsmouth in September 1905. The Russo-Japanese War worsened Russia’s already recessed economy and discredited the tsar and his advisors.

Citation information
Title: “The Russo-Japanese War”
Authors: Jennifer Llewellyn, Michael McConnell, Steve Thompson
Publisher: Alpha History
URL: https://alphahistory.com/russianrevolution/russo-japanese-war/
Date published: July 23, 2019
Date accessed: November 16, 2022
Copyright: The content on this page may not be republished without our express permission. For more information on usage, please refer to our Terms of Use.