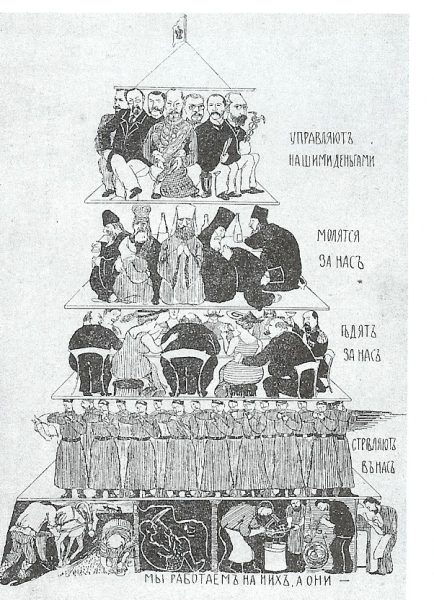 Russia’s social structure was often depicted and lampooned in visual propaganda. For example, there were several versions of the ‘Russian wedding cake’ (see picture above). In these depictions, Russian society is shown as a feudal pyramid. The upper classes are propped up by the labour of the working masses, who are kept in check with work, religion and the threat of violence.

In reality, the base of this cake was significantly broader than these images suggest. The poor peasantry and the industrial working-class made up more than four-fifths of the population, while Russia’s educated and professional middle classes were tiny compared to those of Britain, France and Germany.

According to historian Michael Lynch, the 1897 census categorised the Russian people into the following classes:

Sitting atop this metaphorical pyramid was Russia’s royalty and aristocracy, who for the most part lived lives of comfort, isolated from the dissatisfactions of the lower classes.

Noble titles and land ownership were the main determinants of privilege in tsarist Russia. The tsar himself was a significant landowner, holding the title of up to ten per cent of arable land in western Russia. The Russian Orthodox church and its higher clergy also owned large tracts of land.

Protective of their wealth and privilege, Russia’s landed aristocracy was arguably the most conservative force in the empire. The abolition of serfdom in 1861 allowed many of them to increase their landholdings, largely at the expense of the state and emancipated serfs.

Most of the tsar’s ministers and close advisors were drawn directly from the aristocracy. Once in the ministry, they often blocked or shouted down suggested reforms. Sergei Witte – himself an aristocrat, though one without large landholdings – claimed that “many of the aristocracy are unbelievably avaricious [greedy] hypocrites, scoundrels and good-for-nothings”.

Russia’s middle classes worked for the state (usually in the higher ranks of the bureaucracy) or the private sector, either as small business owners or trained professionals (such as doctors, lawyers and managers).

Industrial growth in the 1890s helped to expand the middle classes by increasing the ranks of factory owners, businessmen and entrepreneurs. Members of this group tended to be educated, worldly and receptive to liberal, democratic and reformist ideas.

Members of the middle-class were prominent in political groups like the Kadets (Constitutional Democrats) and, later, well represented in the State Duma.

The peasantry was by far the empire’s largest social class. It contained at least four out of every five Russians. Most worked small plots of land using methods of farming that had changed little since the Middle Ages.

Farming in Russia was a difficult business that was dictated by the soil, the weather and sometimes pure luck. It was generally easier in Russia’s ‘breadbasket’ southern regions, where the soil was dark and rich and the climate more temperate. Grain crops like barley, rye and oats flourished in these areas.

Russian farming was further hindered by its reliance on antiquated methods and techniques. Most peasants cleared, ploughed and sowed the land by hand, without the benefit of machinery or chemical fertilisers. Some more prosperous peasants had beasts of burden. 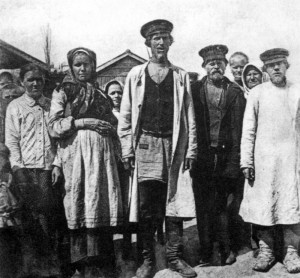 Before 1861, most Russian peasants had been serfs and possessed no legal status or rights as free men. Alexander II‘s emancipation edict gave them freedom of movement and other rights – but the land redistribution that followed left thousands of peasants worse off than before.

After the emancipation, the best tracts of farmland were usually allocated to land-owning nobles. They kept it for themselves or leased it for high rents. The former serfs were left with whatever remained but were obliged to make 49 annual redemption payments to the government – in effect, a 49-year state mortgage. These redemption payments were often higher than the rent and land taxes they paid before 1861.

Some common land was also controlled and allocated by the obshchina or mir (peasant commune). The mir was also responsible for other administrative duties, such as the collection of taxes and the supply of conscripts to the Imperial Army.

The small size of these peasant communes (most villages contained between 200-500 people) and their scattered distribution shaped the worldview of Russian peasants. There was little or no formal education so the majority of peasants were illiterate. Few peasants travelled and returned, so not much was known about the world beyond their village.

As a consequence, peasant communities were insular and defensive. They relied on each other for information and were suspicious, even paranoid about outsiders and strangers. Few peasants had any understanding of government, politics or economics. Many were intensely religious and superstition to the point of medievalism. They believed in magic, witchcraft and devilry and carried symbols and icons to ward off bad luck.

A sizeable proportion of the peasantry was loyal to the Tsar. Some had completed military service, where they had been indoctrinated with pro-tsarist ideas. Others knew little of the Tsar and cared for him even less. They hated the bureaucracy for its taxes, regulations and impositions; they feared the army for taking away their sons. They trusted few other than their own.

But for all their political apathy, the peasantry was occasionally roused to action – particularly by changes that affected them directly, such as food shortages or new taxes. There were significant peasant protests in 1894 when the government introduced a state monopoly on vodka production (previously, the peasants could distil their own, provided they paid a small excise to the state).

Many peasants were also receptive to anti-Semitic propaganda that blamed Russia’s Jews for everything from harvest failures to missing children. Whipped up by rumours and agitators, peasant gangs carried out dozens of pogroms in the late 1800s and early 1900s. Peasant unrest and violence would erupt during the 1905 Revolution, though it was directed at land-owners more than the government.

Though peasant uprisings were never widespread across Russia, well planned or coordinated, they were nevertheless worrying for the tsarist regime.

The plight of Russia’s women 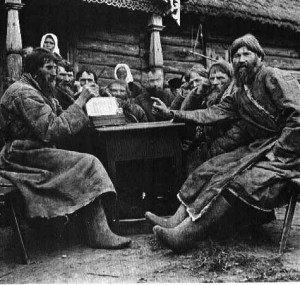 Regardless of class or status, Russian society was deeply patriarchal. Men were dominant in the community, the workplace and the government.

This was not just a product of social values, it was codified in law. The Russian legal code gave husbands almost unlimited power to make decisions within the family. Wives were expected to concede to and obey their husbands. Married women needed their husband’s express permission to take a job, apply for most government permits, obtain a passport or commence higher education.

Russian women could not initiate divorce proceedings (though a husband’s legal authority over his family could be removed in cases of incompetence, such as alcoholism or mental illness). If a man died then his male children inherited most of his property; his wife and daughters received only a small share.

The average age of marriage for Russia’s peasant women was 20; for the aristocracy and middle-classes, it was a few years older. Russia had one of the highest child mortality rates of the Western world. By the late 1800s, around 47 per cent of children in rural areas did not survive to their fifth birthday.

A historian’s view:
“The attitude of the [tsarist] regime to the nobility depended on the circumstances of each individual reign. All tsars, however, considered the nobility to be the key class in terms of wealth and social leadership. They underpinned the social hierarchy that was an integral part of the whole concept of political autocracy. Without this, the political system would be unable to operate effectively. Some of the nobility were involved in the governing process – but this was not their key importance. As in Prussia, the tacit understanding was that the nobility’s social powers were enhanced in return for an acceptance of autocracy that did not essentially involve a contribution towards its exercise.”
Stephen J. Lee

1. Russian society of comprised of more than 125 million people. There was significant diversity of ethnicity, language and culture.

2. The dominant classes were royalty, aristocracy and land-owners, who wielded significant political influence.

3. Russia’s middle class was small in comparison to other nations but was growing by the early 1900s.

4. The peasantry made up by far the largest section, most living in small communities scattered across the empire.

5. Russian society was intensely patriarchal, with men dominant in most spheres of decision-making and women denied many legal and civil rights.

Citation information
Title: “Russian society”
Authors: Jennifer Llewellyn, Michael McConnell, Steve Thompson
Publisher: Alpha History
URL: https://alphahistory.com/russianrevolution/russian-society/
Date published: May 14, 2019
Date accessed: June 16, 2022
Copyright: The content on this page may not be republished without our express permission. For more information on usage, please refer to our Terms of Use.