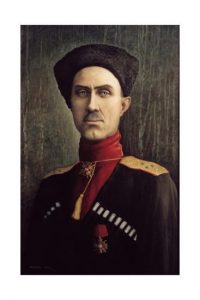 Pyotr Wrangel (1878-1928) was a Russian military officer who served in the Russo-Japanese War and World War I. He later commanded the White army in southern Russia during the Civil War.

Wrangel was born in the Lithuanian city of Novalexandrovsk to a noble family of German heritage. He studied mining and engineering in St Petersburg. After graduating in 1901, he joined the Russian Imperial Army and obtained an officer’s commission.

Wrangel served with distinction in Manchuria during the Russo-Japanese War (1904-5) and in East Prussia during the opening weeks of World War I (1914). By 1917, he was a major-general commanding a Cossack cavalry division in Ukraine and southern Russia.

An aristocratic elitist and a devout tsarist, Wrangel opposed the February Revolution and despised the Soviets, socialists and progressives. He agreed begrudgingly to continue his military service under the Provisional Government – but when the Bolsheviks seized power in October 1917, Wrangel resigned and moved to the Crimea.

By the beginning of 1919, Wrangel was leading White forces in the Caucasus under the supreme command of Anton Denikin. Wrangel and Denikin had a difficult relationship, in part due to their egos and in part because of their conflicting backgrounds (Wrangel was a haughty aristocrat, Denikin the son of a peasant).

The two soon found themselves at loggerheads over strategy. Denikin favoured an advance on the Bolshevik capital, Moscow, but Wrangel, who wanted to unite with Admiral Kolchak‘s army to create a stronger White force, opposed him. This led to Wrangel’s dismissal and exile to Constantinople.

When Denikin’s assault on Moscow failed and he was forced to retreat, Wrangel was summoned to the Crimea to replace him. Wrangel now became the commander of White forces in southern Russia.

With Bolshevik forces now in the ascendancy, there was little Wrangel could do militarily, so he established a White government based on liberal-democratic principles in the Crimea. Among the policies he authorised were radical land reforms, an attempt to win support from local peasants.

In late 1920, as the Bolsheviks moved into the Crimea, Wrangel oversaw the withdrawal of his forces to Allied-controlled Turkey. He remained in the region for several years, trying unsuccessfully to assemble another anti-Bolshevik force.

Wrangel eventually fled to Belgium in 1927 and died there from tuberculosis the following year.