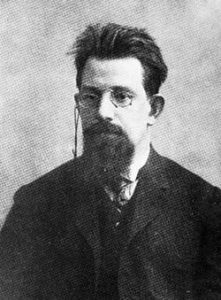 Peter Struve (1870-1944) was a Russian economist, politician, writer and revolutionary. A Marxist initially, Struve was later a co-founder of the Constitutional Democrats (Kadets) and a member of the White movement during the Russian Civil War.

Struve was born in St Petersburg to a family of German origins. He was raised mostly in Germany after his father, a high-ranking official in the Russian bureaucracy, moved the family back there in the 1870s.

During the mid-1890s, Struve made his name as a writer, publishing a successful work on how Marxist economics might be adopted in Russia. This is also led to his arrest at one point.

Towards the end of the 19th century, Struve was a leading figure in the recently formed Social Democrat (SD) party, penning the organisation’s manifesto. His perspective, outlined in his 1894 book, was that Marxism could take root in Russia – but by evolution rather than revolution. This put him at odds with radicals like Vladimir Lenin and Julius Martov.

By the 1905 Revolution, Struve had drifted further to the right, voicing criticisms of Marxism and socialist groups. He became a foundation member of the Kadets, was elected to the Second Duma and supported Russia’s involvement in World War I.

An obvious target of the Bolsheviks, Struve went into hiding after the October Revolution. He was aligned with the Whites during 1919-20, editing a newspaper and working as a diplomatic envoy for General Denikin. Struve later fled to France where he lived until his death in February 1944.