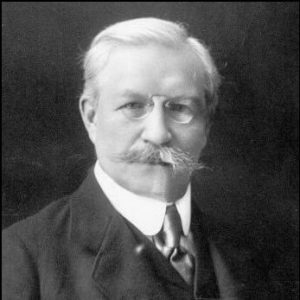 Pavel Milyukov (1859-1943) was a Russian historian, a liberal ideologue and the founder of the Constitutional Democrats or Kadets. He served as the first foreign minister in the Provisional Government but was forced to resign in April 1917.

Milyukov was born in Moscow, the son of an academic who specialised in design and architecture. He entered Moscow University in 1877 to read history, also serving briefly in the Russo-Turkish War (1877-78) as an advisor.

During the 1890s, Milyukov worked as a lecturer and teacher-trainer, while completing his first significant historical work, a survey history of Russian culture. The first volume of this work was released in 1896 and brought him some recognition as a historian.

Milyukov coupled his work with political writing and activism. His views were strongly liberal and he was a strident criticism of tsarist autocracy, frequently claiming that it was blocking social and economic progress in Russia. Like other revolutionaries and reformists of his age, Milyukov was imprisoned for expressing these views.

Strongly pro-Western, Milyukov advocated for the adoption of an American or British constitutional system in Russia, coupled with protections for individual rights. He travelled twice to the United States (1903 and 1905) to deliver lectures on Russia’s problems and the need for reform.

Milyukov participated in the 1905 Revolution as a founding member of the Union of Unions which, in turn, became the Kadets movement. He served in all four Dumas and remained strongly critical of tsarism.

The outbreak of World War I saw Milyukov devote himself to the war effort. In November 1916, at the height of the Rasputin affair, he delivered a speech to the Duma and accused Nicholas II’s government of treason because of its unwillingness and inability to support the Allies.

By the February Revolution, Milyukov was widely viewed as a brilliant intellect and a potential leader. These qualities, coupled with Milyukov’s strong links to the United States, saw him appointed as the Provisional Government’s first foreign minister.

Pavel Milyukov is best known for his April 1917 telegram to the Allies that promised to keep Russia in the war until its completion. This telegram was leaked to the press and the public backlash forced his resignation from the ministry.

After October 1917, Milyukov fled to southern Russia, where he worked as an advisor to the White armies. He later settled in France, where he lived in exile until his death in March 1943.