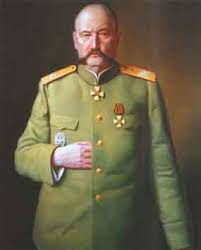 Nikolai Yudenich (1862-1933) was a tsarist military commander in World War I. He became a significant counter-revolutionary leader during the Russian Civil War, commanding White armies in Russia’s north-western regions.

Born in 1862, Yudenich entered the Imperial Army immediately after turning 17. He obtained a commission and graduated from the General Staff Academy in 1887.

Yudenich was as a regimental commander during the Russo-Japanese War (1904-5). He was twice wounded but served with distinction in what was ultimately a disastrous conflict and was promoted to general rank in 1905.

On the outbreak of World War I, Yudenich was sent to the Caucasus region and put in charge of operations against the Ottoman Empire. After a period of stalemate, Yudenich’s forces defeated the Ottoman Third Army at the Battle of Erzurum in July 1916.

Yudenich was still in command in the Caucus when the February Revolution erupted in 1917. He had a difficult working relationship with the Provisional Government and its war minister, Alexander Kerensky, who dismissed him May.

After the October Revolution, Yudenich fled to Finland where he connected with counter-revolutionary groups there. By the end of 1917, he had been chosen to command anti-Bolshevik forces in north-western Russia. He also lobbied delegates from Britain, France and the United States for military and financial aid, though with little success.

Yudenich’s great ambition was to march on Petrograd, expel the Bolsheviks and recapture the city. With much of the Red Army occupied in Siberia and southern Russia, the former capital was seen as a soft target. Yudenich spent most of late 1918 and 1919 assembling an army of around 18,000 men and obtaining military supplies from the Allies and Admiral Kolchak‘s forces in the east.

Yudenich launched his attack from Estonia in early October. It advanced rapidly, capturing three important towns, and got as far as the outer regions of Petrograd. His forces failed to capture key railways, however, which allowed the Bolsheviks to rush back reinforcements. By the end of October, Yudenich’s army was being pushed back towards Estonia.

When the Bolsheviks negotiated a treaty with Estonia in January 1920, Yudenich tried to flee with the country with large amounts of cash. He was arrested but later released and allowed to leave the country. He lived out his days in exile, dying on the French Riviera.

Citation information
Title: “Nikolai Yudenich”
Authors: Jennifer Llewellyn, Steve Thompson
Publisher: Alpha History
URL: https://alphahistory.com/russianrevolution/nikolai-yudenich/
Date published: May 3, 2019
Date accessed: August 15, 2022
Copyright: The content on this page may not be republished without our express permission. For more information on usage, please refer to our Terms of Use.