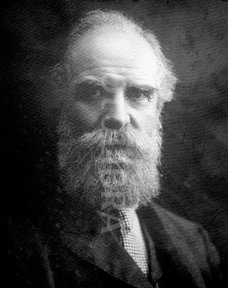 Nikolai Tchaikovsky (1851-1926) was a Russian scientist turned socialist, best known for his opposition to Bolshevik rule during the Russian Civil War.

Tchaikovsky was born in Kirov but relocated to St Petersburg in 1868 to study chemistry. During his studies, Tchaikovsky became involved in radical politics. He joined a populist study group and came to the attention of the tsarist police, twice being arrested.

In 1875, Tchaikovsky and several followers relocated to the United States, where they set up a communistic community in Kansas. The experiment failed after two years and he returned to Europe.

Tchaikovsky spent almost 20 years in London but continued his political activities, meeting with his fellow revolutionaries in exile and producing propaganda to be smuggled back into tsarist Russia. He returned to Russia in 1907 but was promptly arrested for his revolutionary activities.

By 1917, Tchaikovsky was a member of the Petrograd Soviet, where he attempted to resist the rising Bolshevik tide. After the October Revolution, Tchaikovsky was elected to the short-lived Constituent Assembly. When this was dissolved, he began organising and mobilising his fellow socialists against the Bolshevik regime.

In 1918, Tchaikovsky ended up in Archangel as head of the Provisional Government of Northern Russia. Nominally subordinate to Kolchak and the counter-revolutionary government in Omsk, Tchaikovsky’s government remained in control of the northern regions until early 1920 when it was forced to flee the Soviet advance.

Tchaikovsky himself represented northern Russia at the Paris peace conferences. After the dissolution of the northern government, he sought exile in England, dying there in April 1926.

Citation information
Title: “Nikolai Tchaikovsky”
Authors: Jennifer Llewellyn, Steve Thompson
Publisher: Alpha History
URL: https://alphahistory.com/russianrevolution/nikolai-tchaikovsky/
Date published: May 3, 2019
Date accessed: January 29, 2023
Copyright: The content on this page may not be republished without our express permission. For more information on usage, please refer to our Terms of Use.