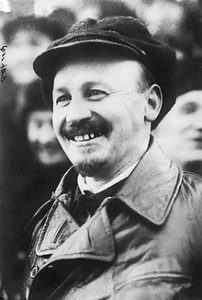 Nikolai Bukharin (1888-1938) was a Russian socialist and Bolshevik leader who played an important role in the new society, both as a politician and a thinker.

Born in Moscow to a family of school teachers, Bukharin received a good education. He entered Moscow University to study economics, a field he would specialise in during the revolution and beyond.

Bukharin became involved in left-wing political groups as a teenager. He joined the Social Democrats (SDs) at age 17 and immediately aligned with the Bolshevik faction led by Vladimir Lenin.

Bukharin served as a foundation member of the Komsomol (the Bolshevik youth league) and held other influential positions. By 1912, he was considered one of the party’s brightest young lights and a possible successor to Lenin.

Like other Bolsheviks, Bukharin spent several years either in prison or exile. This included a period in the Polish city of Krakow, where he first met Lenin, and several months in New York, where Bukharin collaborated with Leon Trotsky.

Bukharin returned to Russia after the February Revolution and based himself in Moscow. He became the most influential Bolshevik figure in Moscow before and during the October Revolution. He also became the editor of the newspaper Pravda.

Despite being closely aligned with Lenin, Bukharin did not share his political perspectives. Bukharin’s views on revolution were more anarchistic and internationalist than Lenin’s. For this reason, Bukharin came to be associated with the left-wing faction of the Bolshevik party.

The most obvious point of difference was Bukharin’s attitude to the Treaty of Brest-Litovsk. He rejected any suggestion of negotiating with or making concessions to capitalist nations, whether they belonged to the Allies or the Central Powers. Bukharin believed that Russia must remain in the war to prolong it and help bring about a socialist revolution in Germany.

In 1919, Bukharin became a member of the party’s Politburo. He focused more on writing and became an important source of economic ideas and theories. His political views moderated and he came to support Lenin’s New Economic Policy and, after Lenin’s death, the leadership of Joseph Stalin.

Bukharin parted ways with Stalin over economic policy. He opposed Stalin’s program of land collectivisation and rapid industrialisation, preferring to continue the NEP. He was eventually expelled from the Politburo, arrested and executed on Stalin’s orders.

Citation information
Title: “Nikolai Bukharin”
Authors: Jennifer Llewellyn, Steve Thompson
Publisher: Alpha History
URL: https://alphahistory.com/russianrevolution/nikolai-bukharin/
Date published: April 10, 2019
Date accessed: May 16, 2022
Copyright: The content on this page may not be republished without our express permission. For more information on usage, please refer to our Terms of Use.