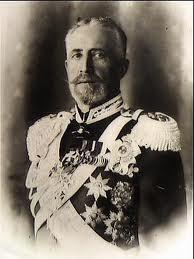 Nicholas was born in St Petersburg, the eldest son of Grand Duke Nicholas, the third son of Tsar Nicholas I. This made him the first cousin of his namesake, the future Nicholas II. To differentiate them, family members referred to Nicholas Nikolaevich as “Nikolasha” or “Nicholas the Tall” due to his imposing height.

Nicholas followed in his father’s footsteps by entering the military as a teenager. Within years, he had seen action in the Russo-Turkish War (1877-78). By the mid-1880s, Nicholas had reached the rank of major general. In 1895, he became the inspector-general of the Imperial Cavalry.

As a military officer, the Grand Duke was said to be tough and authoritarian – but competent and reasonable enough to earn the respect of those he commanded. He was said to be more liberal-minded than most of his rank. According to an apocryphal legend, Nicholas supported a measure of constitutional reform and refused to use troops to quell civilian unrest.

In 1914, Nikolaevich put in charge of Russian forces on the Western Front, despite having little experience at combat command. His leadership was not disastrous but nor was it talented or adaptive enough to overcome the enormous structural problems in the Russian army.

In August 1915, Nicholas II dismissed his cousin as commander-in-chief, opting to personally replace him. The Grand Duke served out the war in safe postings in the Caucasus.

After the February Revolution, Nicholas spent two years in exile in the Crimea, along with other minor royals. There were attempts to place him at the head of the White movement but these were not successful and it is doubtful that Nicholas would have accepted anyway.

The Grand Duke fled the Crimea in April 1919 as Red Army forces closed in on the peninsula. He spent the rest of his life in exile in Italy and France, passing away on the French Riveria at age 72.