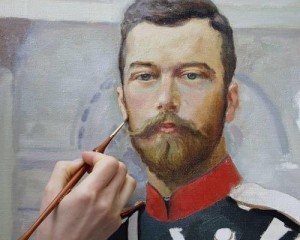 Nicholas II (1868-1918) was the last tsar of Russia, reigning from November 1894 until his overthrow in March 1917. Along with his family, he was detained by the Provisional Government and then the Bolsheviks, before being executed in Ekaterinburg in July 1918. Most historians agree that Nicholas lacked the capacity or vision to rule Russia through the challenges of the early 20th century.

Born in Tsarskoye Selo in 1868, Nicholas was the eldest son of Alexander III and Maria Feodorovna, a Danish princess. Nicholas’ father would later reimpose autocracy and political oppression in Russia after the assassination of Alexander II.

In stark contrast to his father, Nicholas was short, shy and softly-spoken. He was, by all accounts, a good student of above-average intelligence but lacked the bearing, confidence and assertiveness expected of autocratic tsars. Those who met the young Tsarevich described him as pleasant and likeable but otherwise unremarkable.

In his youth, Nicholas served in the imperial cavalry and attained the rank of colonel. He also had the opportunity to travel widely through Europe and Asia. In 1891, while visiting the Japanese city of Otsu, Nicholas was attached by a Japanese bodyguard, who struck him in the head with a sabre. This incident left Nicholas with a less than favourable view of Japan and its people.

As Tsarevich, Nicholas famously expressed reluctance about becoming tsar, declaring that he “never wanted to rule”. He placed tradition above his own personal concerns, however, and assumed the throne after the death of Alexander III in 1894. He later pledged to uphold the autocracy bequeathed by his father and to preserve the monarchy for his own son.

Nicholas had several admirable qualities. He was a nationalist who professed a love for Russia and its people; he had a strong sense of duty and a stilted affection for the peasantry. But he was also blindly conservative, relied excessively on the advice of aristocratic elites and religious prelates and exhibited some dark prejudices. Arguably the worst of these was his anti-Semitism.

Nicholas held a twisted view that revolutionary ideas were the products of dark forces. In most cases, he attributed revolutionary activity to university students or Jewish plotters. Nicholas was at least indirectly responsible for the The Protocols of the Elders of Zion, the anti-Jewish hoax produced and distributed by agents of the Russian Okhrana. Nicholas also provided moral and financial support to reactionary and anti-Semitic groups like the Black Hundreds.

Nicholas was also an imperialist who associated territorial expansion with success and glory. The ill-fated forays into Korea that triggered the Russo-Japanese War were largely his doing, ordered against the advice of his ministers and generals. 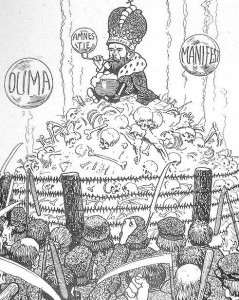 Conventional historiography, steeped in liberal animosity towards communism, has often portrayed Nicholas as a pathetic figure: a victim rather than a failure. He was a weak and short-sighted ruler who was undermined by a domineering wife, a society in transition and a world war that fractured the pillars of tsarism.

A more realistic study suggests Nicholas was a leader who was more responsible for his own fate than is often suggested. He was out of touch with his people but no more than other monarchs of his era. Early in his reign, he resolved to follow his dead father in upholding and reinforcing the autocratic monarchy. His commitment to this ultimately produced his own doom.

Confronted with some glaring warning signs in 1905 – a humiliating military defeat, a frozen economy, political violence and an outraged people – Nicholas ignored them all, promising reform in the October Manifesto but doing so with no sincerity. When he signed the April 1906 Fundamental Laws, Nicholas might as well have signed his own death warrant.

Nicholas’ rule was also endangered by his choice of wife. He and Alexandra were undoubtedly in love but her political views only mirrored and reinforced his own. Though she had no direct experience of government or politics, Alexandra was also outspoken about matters of state and her suggestions had more influence on Nicholas than they ought to have had.

In addition, Alexandra’s friendship with Grigori Rasputin only disrupted and undermined the tsarist regime, particularly in its final year. Though Nicholas was more suspicious of Rasputin and his behaviour, he allowed the continued presence of the Siberian faith healer in the royal court in order to placate his wife.

A historian’s view:
“[Nicholas] was handsome and blue-eyed but diminutive and hardly majestic, and his looks and immaculate manners concealed an astonishing arrogance, contempt for the educated political classes, vicious anti-Semitism, and an unshakable belief in his right to rule as a sacred autocrat. He was jealous of his ministers, and he possessed the unfortunate ability to make himself utterly distrusted by his own government. His marriage to Princess Alexandra of Hesse only exacerbated these qualities.”
Simon Sebag Montefiore

1. Nicholas II, the last Tsar of Russia and the son of Alexander III, took the throne swearing to preserve the autocracy.

2. He was intelligent and well-travelled but lacked both the demeanour and foresight to rule at a time of unfolding change.

3. He was also religious, conservative and thought problems in his regime were the work of conspirators.

4. Nicholas’ wife Alexandra was a German-speaking princess. They married against the wishes and advice of others.

5. Alexandra was devoutly religious and strong-willed: her association with Rasputin and her political advice and influence on Nicholas during times of crisis contributed to the downfall of tsarism.

Citation information
Title: “Tsar Nicholas II”
Authors: Jennifer Llewellyn, Steve Thompson
Publisher: Alpha History
URL: https://alphahistory.com/russianrevolution/nicholas-ii/
Date published: May 15, 2016
Date accessed: June 25, 2022
Copyright: The content on this page may not be republished without our express permission. For more information on usage, please refer to our Terms of Use.