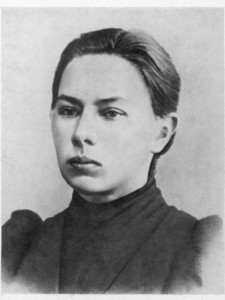 Nadezhda Krupskaya (1869-1939) is best known as the wife of Vladimir Lenin but she was an important revolutionary in her own right. Krupskaya’s contribution to the Bolsheviks included work as a party organiser and propagandist. She also made significant contributions to Bolshevik feminist theory.

Krupskaya was born in St Petersburg to a struggling family that had previously boasted noble titles and, according to some accounts, revolutionary views. She was a keen student with an interest in literature, history and politics.

After completing her own education the young Krupskaya worked as a tutor, teaching factory workers literacy and basic mathematics. During this period she also became involved in radical politics, joining Marxist study groups.

Krupskaya met Lenin in 1894 and they expressed respect and admiration for each other’s work. In 1896, both Lenin and Krupskaya were arrested for their political activities and exiled to Siberia. Tsarist authorities permitted them to marry and remain together in exile.

While in Siberia, Krupskaya continued to write and disseminate propaganda through the underground. Later, she accompanied Lenin to Geneva and sat on the editorial committee of Iskra.

Krupskaya’s views generally aligned with those of Lenin – but not always. She occasionally disagreed with him and was prepared to say so. Perhaps the best-known example of this was her publicly-expressed view that the October 1917 revolution was carried out prematurely.

A good deal of Krupskaya’s writing and revolutionary activity was concerned with the rights and status of women. She was a co-founder of International Women’s Day and along with Alexander Kollontai and Inessa Armand, a significant contributor to Bolshevik feminist theory.

After 1917, Krupskaya held high positions in both the Communist Party and the Soviet government, particularly in the fields of education (where she was deputy commissar) and the Soviet youth movement Komsomol.

After Lenin’s death, Krupskaya became a strident critic of Joseph Stalin, attacking him for deviating from her husband’s legacy. Her profile as Lenin’s widow allowed her to escape recriminations from Stalin but she was censored and marginalised until her death in 1939.