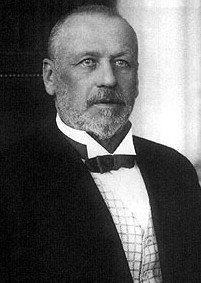 Mikhail Rodzianko (1859-1924) was a conservative politician and one of the founders of the Octobrist party. He became president of the State Duma and later played a significant role in the February Revolution of 1917.

Rodzianko was born to a Ukrainian family of wealthy landowners. He enlisted in the Russian Imperial Cavalry as a teenager and completed several years of military service. He retired to his family estate while still in his 20s and held a number of provincial positions, including a seat in his local zemstvo.

The 1905 Revolution energised Rodzianko’s interest in national politics. In 1905, he became a founding member of the Octobrist party. Two years later, he was elected to the Third Duma. He became president of the Duma in March 1911 and remained in this role until the February Revolution.

Rodzianko was a deep-voiced, rather overweight man who was renowned for speaking his mind and occasionally losing his temper. The frankness of his messages to Tsar Nicholas II and other important figures bear this out.

Rodzianko was a political conservative who wanted tsarism to survive. He had a difficult relationship with the Tsar, however, and was continually frustrated by Nicholas’ unwillingness to accept advice.

To cite one example, Rodzianko was famously opposed to Grigori Rasputin and his connections with the royal family. He repeatedly urged the Tsar to dismiss Rasputin but these overtures were ignored. According to one account, Rodzianko beat up Rasputin at a church service after claiming the Siberian faith healer had tried to hypnotise him.

History best remembers Rodzianko as the man who repeatedly warned Nicholas II about the impending revolution in late 1916 and early 1917. These warnings, which were clear and quite blunt, were ignored by the Tsar, who referred to the Duma president as “that fat Rodzianko”.

In March 1917, Rodzianko headed the Duma’s Provisional Committee and led the negotiations that resulted in the Tsar’s abdication. For a few days, it seemed like he might become Russia’s first post-tsarist prime minister – but he was eventually overlooked for Georgy Lvov.

Rodzianko left Petrograd immediately after the Bolshevik revolution in October 1917. He supported the White movement before eventually fleeing Russia. Rodzianko spent the rest of his days living humbly in Serbia.