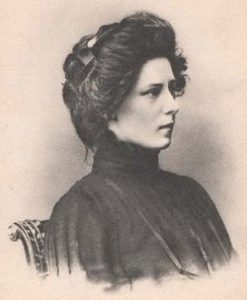 Maria Spiridonova (1884-1941) was a Russian revolutionary who gained notoriety and acclaim for assassinating a much-loathed tsarist officer in 1906. She later emerged as the leader of the Left Socialist-Revolutionaries (Left SRs).

Spiridonova was born in Tambov, the daughter of a bank manager of noble origins. Educated in Tambov and Moscow, she undertook training in dentistry and nursing but abandoned them to participate in revolutionary groups.

In 1905, Spiridonova joined the Socialist-Revolutionaries (SRs) in 1905 and aligned herself with the party’s radical wing. She rose to prominence after shooting dead a tsarist police commander in January 1906. Her victim, General Luzhenovsky, had been earmarked by the SRs for his brutal suppression of peasant uprisings in Spiridonova’s native Tambov.

After surrendering to tsarist soldiers, Spiridonova was beaten, tortured and sexually assaulted. She was sentenced to death in March 1906. By this stage, however, Spiridonova had become something a national cause célèbre and the government commuted her sentence to life imprisonment in Siberia.

Spiridonova was released during the Provisional Government‘s March 1916 amnesty. She returned to Petrograd and soon emerged as the leader of the Left SRs faction. Though never a prolific writer, she commanded enormous respect, even from her political rivals. Louise Bryant, the wife of John Reed, wrote of Spiridonova:

“I have not met a woman her equal in any country… If she were not such a clear thinker and so inspired a person, her leadership of the physical giants would be ludicrous. She may weigh 100 pounds and she may weigh less. She has big grey eyes circled with blue rings and soft brown hair which she wears in a coronet braid. She works on an average of about 16 hours a day and everybody in Russia pours into her office to ask advice.”

Under Spiridonova’s leadership, the Left SRs formed a working alliance with the Bolsheviks after the October Revolution. Spiridonova herself did not join the coalition government but remained at the helm of her party. She was prepared to work with the Bolsheviks only because their agenda was similar to that of her own party.

Differences between the two parties widened during the summer of 1918, chiefly over the closure of the Constituent Assembly and the Treaty of Brest-Litovsk. Outraged at the terms of the treaty, Spiridonova authorised the assassination of Count Wilhelm von Mirbach, the German ambassador to Moscow.

This incident triggered the failed uprising of the Left SRs. Spiridonova was arrested by the Cheka and put on trial. Still immensely popular with the people, she was given just one year in prison.

After her release in 1919, Spiridonova continued to struggle against Bolshevik authoritarianism. She was arrested again in October 1920 and subjected to years of imprisonment, confinement and exile. She was murdered by Stalinist soldiers in 1941.