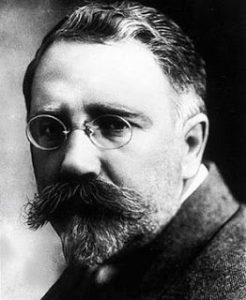 Leo or Lev Rosenfeld was born in Moscow, the son of a Jewish father and a Russian Orthodox mother. He was educated in Georgia and then later at Moscow University, where he became interested in Marxism and radical politics.

Rosenfeld joined the Social Democrats (SDs) in his late teens and became a full-time revolutionary, adopting the surname Kamenev (a Russian word meaning ‘stone’). Kamenev’s radicalism was further entrenched when he married Olga Bronstein, the younger sister of Leon Trotsky.

Kamenev became a disciple of Vladimir Lenin, though he lacked Lenin’s stubborn fanaticism. He carried out a number of duties for the Bolshevik movement between 1903 and 1914, chiefly in organisation and publishing.

After returning to Russia in 1914 to oversee Pravda, Kamenev was arrested and exiled to Siberia. He remained there until freed during the post-February Revolution amnesty. Kamenev returned to Petrograd to manage Pravda with, among others, Joseph Stalin.

One of the Bolshevik party’s more moderate leaders, Kamenev opposed Lenin’s wish to seize power in October 1917. He later became chairman of the Moscow Soviet and a full member of the Politburo.

Kamenev’s relationship with his brother-in-law, Trotsky, deteriorated after 1920. Along with his close collaborator, Grigory Zinoviev, Kamenev sided with Stalin and was instrumental in his rise to power.

Their alliance with Stalin collapsed in 1925 and Kamenev was expelled from the Communist Party two years later. He was arrested during Stalin’s 1936 purges, given a show trial and executed by firing squad.