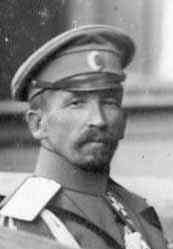 Lavr Kornilov (1870-1918) was a leading general in the tsarist Imperial Army. He is best known for leading a suspected conspiracy against the Alexander Kerensky-led Provisional Government in August 1917.

Born into a Cossack family in what is now Kazakhstan, Kornilov entered the army at age 15. He trained at cadet and military academies in Omsk and St Petersburg, graduating with an officer’s commission in 1892.

Kornilov became something of an expert in Russia’s Asian territories, publishing intelligence articles and studying their languages. He also proved himself an excellent battlefield soldier, serving with distinction during the Russo-Japanese War.

By the outbreak of World War I, Kornilov was a major-general. He was taken prisoner by the Austrians in 1915 but escaped the following year, crossing eastern Europe by foot to return to his army. This exploit made Kornilov something of a hero and a cult figure.

Kornilov was put in charge of the Petrograd garrison after the February Revolution. He was frustrated by the weakness of the Provisional Government, however, and returned to the front at his own request.

A conservative-nationalist who was bitterly opposed to socialism, Kornilov was appalled by the Provisional Government’s failure to manage the war effort and its unwillingness to suppress the Petrograd Soviet or the Bolsheviks. Kornilov also opposed Kerensky’s attempts to reform the military by abolishing capital and corporal punishments.

In August 1917, Kerensky appointed Kornilov the commander-in-chief of the Russian army. Shortly after, Kornilov began negotiating with prominent Russians who wanted the Provisional Government replaced by a military junta capable of suppressing radicalism.

Kornilov began mobilising troops to march on Petrograd, while Kerensky turned to the Petrograd Soviet to defend the city against a military counter-revolution. Kornilov’s attempted coup was short-circuited and he was arrested and detained.

The general later escaped and took the helm of a White Army regiment in the first months of the Russian Civil War. He was killed by Bolshevik artillery in southern Russia in April 1918.

Citation information
Title: “Lavr Kornilov”
Authors: Jennifer Llewellyn, Steve Thompson
Publisher: Alpha History
URL: https://alphahistory.com/russianrevolution/lavr-kornilov/
Date published: May 2, 2019
Date accessed: January 30, 2023
Copyright: The content on this page may not be republished without our express permission. For more information on usage, please refer to our Terms of Use.