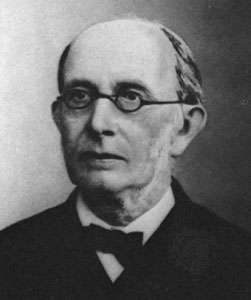 Konstantin Pobedonostsev (1827-1907) was an ultra-conservative Russian academic and politician, an administrator of the Russian Orthodox Church and influential advisor to Alexander III.

Pobedonostsev joined the imperial bureaucracy in the 1840s and spent some 15 years in the public service. In 1859, he became a professor of law at Moscow University. He also worked as an advisor on government policy and reform.

Pobedonostsev was an unbending conservative who defended tsarist sovereignty, autocracy and the Orthodox Church at every turn. He viewed Russia’s traditional institutions as sacrosanct and argued that foreign ideas had no place in his country. Democracy, he argued, was “the biggest lie of our time” and the “dictatorship of a vulgar crowd”.

Pobedonostsev was also notoriously anti-Semitic. He once described Jews as a “parasitic” group who took root in a flourishing society but could not maintain a society of their own.

In 1865, Pobedonostsev was recruited to oversee the education of the children of Alexander II. In this role, he tutored two future tsars, Alexander III and Nicholas II. The education he provided imbued the princes with the stubborn political conservatism that shaped their reigns – and in Nicholas’ case, ended his.

In 1880, Pobedonostsev was appointed Chief Procurator of the Holy Synod. This allowed him to provide the tsar with advice on religious, social and educational matters, a role of significant influence. He remained in this office for 25 years.

He was eventually forced into retirement by the 1905 Revolution and died two years later.