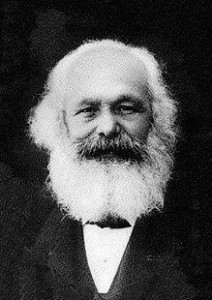 Karl Marx (1818-1883) was a German writer and political philosopher. Though he died a generation beforehand, Marx’s theories and texts provided the ideological impetus for Russian revolutionary groups.

Born in Prussia to a middle-class Jewish family, Marx was trained and worked briefly as a lawyer. His true interest, however, was in political and economic theory, particularly the works of Georg Hegel.

In 1842, Marx met and became friends with Friedrich Engels, the son of a wealthy German industrialist. The two began a collaboration that saw them undertake critiques of capitalist economies and the treatment of industrial labour.

Marx and Engels’ first major work was The Communist Manifesto, published in 1848. In this text, they examined the strained relationships and class exploitation that existed in industrial capitalism. They argued that mankind was moving through a series of socio-economic phases, each defined by the ownership or control of capital, and that “all history was the history of class struggle”.

The Communist Manifesto and a later work, Das Kapital (1867), came to form the basis of the political ideology known as Marxism. This ideology inspired numerous left-wing political movements across Europe during the late 19th and early 20th century. Among them were the Russian Social Democrats (SDs) and their factional offspring, the Mensheviks and Bolsheviks.

Marx himself struggled with poor health and periods of poverty during his life. He died in exile and was buried in London’s Highgate Cemetery.