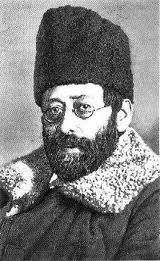 Julius Martov (1873-1923) was a Russian politician and Marxist revolutionary. Aligned with Vladimir Lenin at first, Martov later became the most prominent member of the Menshevik faction.

Julius Martov was born to a Jewish middle-class family living in the Ottoman capital of Constantinople. His father worked for a Russian shipping company and as a correspondent for Russian newspapers. When Julius was four, the family relocated to Odessa, then to St Petersburg. They experienced anti-Semitic harassment in both cities.

Martov entered university to study science but instead became involved in politics. He is said to have acquired his revolutionary beliefs as a teenager, possibly in response to repressions under Alexander III and the famine that ravaged Russia in 1891-92.

In 1892, Martov was arrested for anti-tsarist activities and sentenced to two years’ exile in Vilna. On his return to St Petersburg, he met Vladimir Ulyanov, then a law student, and the two co-founded a radical group called the Union of Struggle for the Emancipation of the Working Class. Martov was again arrested and condemned to a period of exile, this time to Siberia.

In 1900, Martov joined Lenin and other members of the Social Democratic party in Switzerland. There, the two founded the party newspaper Iskra.  Divisions between the two emerged, however, culminating the 1903 split that formed two party factions: the Bolsheviks and the Mensheviks.

Martov became the de facto leader of the second faction. He argued the party should agitate against bourgeois government but not directly attempt to overthrow it. Unlike right-wing elements in the Menshevik movement, he opposed World War I and Russia’s involvement in it.

Martov is perhaps best known for walking out of the Congress of Soviets the day after the October Revolution. He returned to sit as a delegate in the short-lived Constituent Assembly but played no significant role in Russian politics thereafter.

Martov’s final years were spent in exile in Germany, where he died in April 1923.