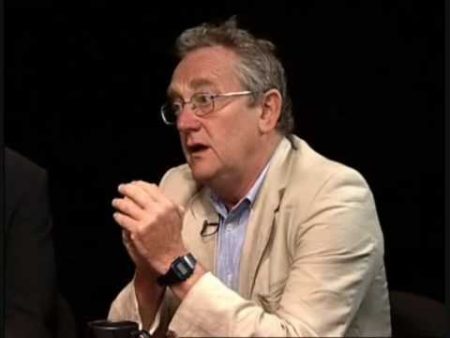 Robert Service is one of Britain’s best-known experts on Russia and the Russian Revolution. Educated at Cambridge and Essex Universities, Service held a professorship at Oxford until 2013. He is a prolific writer, penning eight books on modern Russian history, including biographies of Vladimir Lenin, Leon Trotsky and Joseph Stalin.

Service’s perspectives are post-revisionist and liberal. He is strongly critical of Lenin and other Bolshevik leaders, particularly the manner in which they handled change and crisis in post-1917.

Service saves his strongest condemnations for the ideology of Marxist communism. In Comrades (2007), Service argues that Marxism was an “infection” and a “virus” that ultimately evolved into a political religion. It kept its followers spellbound by dreams of a better world to come, while hardening and blinding them to the sufferings of the Russian people.

Since the early 1990s, Service has been one of few Western historians to gain access to previously-closed Soviet archives. As a result, he has uncovered a good deal of hitherto unknown information about the Bolshevik party, its leaders and the events of 1917-24.

To cite one example of this, Service was the first Western historian to examine Lenin’s hand-written 1918 ‘hanging order‘, which commanded the public execution of 100 kulaks in Penza, chiefly as a deterrent to others.

Service has also uncovered medical information about Lenin’s failing health, suggesting the Bolshevik leader’s radical impatience may have been driven by an awareness of his approaching death.

“Official Marxism was emptying the minds of its adherents and then filling them with its potent tincture… There had always been a suspicion that the founders of Marxism were imbued with religiosity of a secular kind. They remained unconsciously influenced by religious ideas about the future perfect society and the salvation of humanity. They were fixed in their godless faith, as solidly as any Jewish or Christian believer. Soviet communists quoted excerpts from books by Marx, Engels and Lenin after the fashion of religious people with their sacred texts.”

“What happened in Russia after October 1917 had caught Lenin and his Bolsheviks by surprise. They recoiled at first and then reconsidered how best to deal with the situation … For a while the communists expected the difficulties to fade away, as the generations of people who had lived under the Russian Empire died off. They also tried to hurry forward a solution by campaigns of incarceration, as well as indoctrination.”

“And yet, while Lenin was cunning and untrustworthy, he was also dedicated to the ultimate goal of communism. He enjoyed power; he lusted after it. He yearned to keep his party in power. But he wanted power for a purpose. He was determined that the Bolsheviks should initiate the achievement of a world without exploitation and oppression.”

“They [the Bolsheviks] grabbed governmental authority through conspiracy. They were disciplined and centralised and they served their dictatorial leader Lenin with blind devotion. Thus the Russian ‘masses’ were highjacked into acceptance of the coup of October by a tiny intellectual elite of megalomaniacs.”

“Trotsky is usually regarded as a person with qualities that put him in a different category to Stalin… But Trotsky was no angel. His lust for dictatorship and terror was barely disguised in the Civil War. He trampled on the civil rights of millions of people, including the industrial workers. His self-absorption was extreme.”

Citation information
Title: “Historian: Robert Service”
Authors: Jennifer Llewellyn, Steve Thompson
Publisher: Alpha History
URL: https://alphahistory.com/russianrevolution/historian-robert-service/
Date published: May 3, 2019
Date accessed: June 28, 2022
Copyright: The content on this page may not be republished without our express permission. For more information on usage, please refer to our Terms of Use.