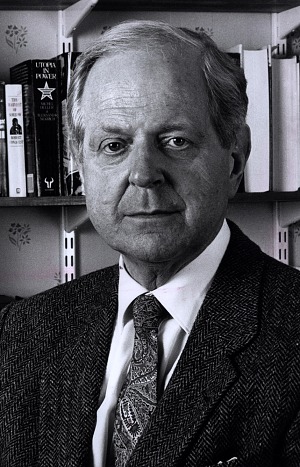 Robert Conquest was one of the 20th century’s best-known historians specialising in Russia. Though his work focuses mostly on the reign of Joseph Stalin, Conquest has also written extensively about the Russian Revolution and the early Soviet republic, including a popular biography of Vladimir Lenin.

Conquest was born in Worcestershire to a British mother and an American serviceman she had met during World War I. He was raised in Britain and Italy, becoming fluent in both Italian and French.

During the 1930s, Conquest completed a doctorate in Soviet history at Oxford. He was also a member of the Communist Party, however, he abandoned this after the party opposed Britain’s involvement in World War II. Conquest enlisted in the British Army, served as an intelligence officer and learning both Russian and Bulgarian.

After the war, Conquest joined a British department tasked with examining and countering Soviet propaganda. From the mid-1950s, he held several university posts at the London School of Economics and in the United States. He began writing about Soviet Russia in the 1960s, penning numerous books, the best known of which was The Great Terror (1968), an account of Joseph Stalin’s purges in the mid-1930s.

When sources from the Soviet archives were gradually made available during the Gorbachev era, Conquest was one of the first Western historians to examine and interpret them. This led Conquest to revise and update The Great Terror and some of his earlier writings.

Conquest was openly and often proudly anti-Soviet and anti-communist. He argued that Marxism was a flawed ideology based on fictitious and misleading assumptions; that the October Revolution was a coup d’etat without widespread popular support; and that Soviet communism had totalitarianism at its core from the outset. He also rejected the argument that Stalin had deviated from Lenin’s legacy.

Robert Conquest was highly acclaimed and decorated, particularly in the United States, where he was awarded the Presidential Medal of Freedom in 2005. He died in California in August 2015, aged 98.

“Marx (like others facing a fresh social phenomenon) came to his conclusion about the mystic historical nature of the new proletarian class before he had even seen an actual proletarian. This, indeed, was true of Lenin in the 1880s.”

“Czarism may have been the most repressive regime of its time in Europe but Lenin’s Soviet Union was far more violently repressive than anything the continent had seen in centuries – never mind the greater horrors that followed Lenin’s death. It can hardly be maintained that Russian communism was merely a continuation of what came before.”

“It is clear from the reports of the meeting of the Central Committee nine days before the October Revolution in 1917 that the idea of the rising was ‘not popular’, that ‘the masses received our call with bewilderment’. Even the reports from most of the garrisons were tepid. The seizure of power was, in fact, almost a purely military operation, carried out by a small number of Red Guards, only partly from the factories, and a larger group of Bolshevised soldiery. The working masses were neutral.”

“Kronstadt saw the Party aligned finally against the people. Even the Democratic Centralists and the Workers’ Opposition threw themselves into the battle against the sailors and workers. When it came to the point, Party loyalty revealed itself as the overriding motive. War was openly waged on the idea of libertarian radical socialism, on proletarian democracy. On the other side, there remained only the idea of the Party.”

“Lenin and his successors ruled by consolidating their machinery of power and by subjecting the populace to saturation barrages of propaganda. At the same time, the politico-economic apparatus solidified into a new caste… Lenin invented the term ‘kulak’, signifying a newly prosperous peasant, in order to wage class warfare and seize the holdings of small landowners. Millions of human beings perished, and the agricultural economy was wrecked.”

“Dead in 1924 at the age of 53, [Lenin] largely left the blame for the system as it developed to his successors. There is something in Orwell’s way of putting it, that Lenin was “one of those politicians who win an undeserved reputation by dying prematurely”.”

Citation information
Title: “Historian: Robert Conquest”
Authors: Jennifer Llewellyn, Steve Thompson
Publisher: Alpha History
URL: https://alphahistory.com/russianrevolution/historian-robert-conquest/
Date published: May 24, 2019
Date accessed: August 14, 2022
Copyright: The content on this page may not be republished without our express permission. For more information on usage, please refer to our Terms of Use.