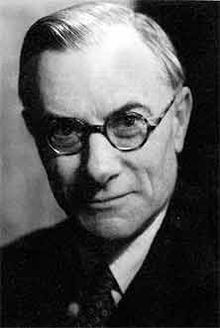 Edward Hallett Carr, known to readers as E. H. Carr and to colleagues as Ted, was one of Britain’s foremost historians of the 20th century. He was born in North London to a family of liberal-progressive views and educated at Merchant Taylor’s School and Trinity College, Cambridge. Carr graduated with a degree in classics in 1916. He later wrote that the Russian Revolution, which erupted the following year, fuelled his lifelong interest in history.

For two decades between 1916 and 1936, Carr served in the British Foreign Office. His work took him to the Paris peace conference in 1919 and the League of Nations during the 1920s. A posting to the Baltic city of Riga further sharpened his interest in Russian history and culture.

Carr wrote prolifically through the 1930s and during World War II was an assistant editor at The Times. He joined the academic staff at Oxford University after the war and remained there until his death.

Though he penned several earlier books on Russia, Carr’s best-known work in this field was A History of Soviet Russia, published in 14 volumes between 1950 and 1978. It was later condensed into a single work, The Russian Revolution: From Lenin to Stalin (1917-1929).

Carr’s A History of Soviet Russia received vociferous acclaim by numerous prominent historians, including A. J. P. Taylor, Isaac Deutscher, Hugh Seton-Watson and Eric Hobsbawm. They lauded Carr’s close knowledge and attention to detail – but also his balance. Unlike conservative Cold War historians like Richard Pipes, Carr was willing to praise the Soviet Union and its leaders for what he interpreted as their successes.

Because of these attempts to walk a straight line, Carr was often accused by liberal-conservatives of being ‘soft’ on communism, an admirer of Vladimir Lenin and an apologist for Joseph Stalin. George Orwell, for example, once identified Carr as a potential Soviet sympathiser. Historians on the right criticised Carr for accepting Soviet sources and information at face value, and for ignoring or downplaying the use of violence and terror. Carr’s decision to end his history of the Russian Revolution at 1929, before the worst of Stalin’s purges and provincial famines, also drew criticism.

Modern historians with access to Soviet archival material have identified errors and misjudgements in Carr’s landmark work. Despite this, it remains one of the 20th century’s most significant histories of revolutionary Russia.

“In Marx, there is no trace of attempts to create Utopias, to guess in the void at what cannot be known. Marx formulates the question of communism in the same way as a natural scientist might formulate the question of, say, a new biological species, once we know that this has somehow come into existence and is evolving in some definite direction.”

“In Russia, modern industry had sprung fully armed from the brain of western and Russian finance. The motives for its development were as much political as economic. It owed far more to the initiative of the state and of the banks than of the individual entrepreneur… The differences between the Western and the Russian factory worker were even more noteworthy. The western factory worker still possessed some of the skills and other characteristics of the small artisan. The Russian worker was a peasant who had come from the village and might return there in slack seasons or in periods of economic depression. Legally he remained a peasant… He lacked the degree of industrial skill and education which bred in the west the growing class of ‘labour aristocracy’ interested in the profits of capitalism, and, being subject to almost unlimited exploitation, provided fertile soil for revolutionary propaganda.”

“The first Russian Revolution of 1905 had a mixed character. It was a revolt of bourgeois liberals and constitutionalists against an arbitrary and antiquated aristocracy. It was a revolt of workers, sparked off by the atrocity of ‘Bloody Sunday’, and leading to the election of the first Petersburg Soviet of Workers’ Deputies. It was a widespread revolt of peasants, spontaneous and uncoordinated, often extremely bitter and violent. The three strands were never woven together and the revolution was easily put down at the cost of some largely unreal constitutional concessions.”

“[In 1917] the Russian bourgeoisie, weak and backward in comparison with its western counterparts, possessed neither the economic strength nor the political maturity, neither the independence nor the inner coherence necessary to wield power.”

“[The popular revolution in 1917] was a mass movement inspired by a wave of immense enthusiasm and by Utopian visions of the emancipation of mankind from the shackles of a remote and despotic power. It had no use for the western principles of parliamentary democracy and constitutional government proclaimed by the Provisional Government. The notion of centralised authority was tacitly rejected. Local Soviets of workers or peasants sprang up all over Russia.”

“For six months [in early 1918] the [Bolshevik] regime lived from hand to mouth. Then the gathering storms of the civil war and the economic collapse drove the government in the summer of 1918 to the more drastic policies later known by the ambiguous name of “war communism”. Food was the first priority. The workers in towns and factories were hungry.”

“He [Stalin] revived and outdid the worst brutalities of the earlier Tsars, and his record excited revulsion in later generations of historians. Yet his achievement in borrowing from the West, in forcing on primitive Russia the material foundations of modern civilisation, and in giving Russia a place among the European powers, obliged them to concede, however reluctantly, his title to greatness. Stalin was the most ruthless despot Russia had known since Peter, and also a great Westerniser.”

“If the goals [of the Stalinist regime] could be described as socialist, the means used to attain them were often the very negation of socialism. This does not mean that no advance at all had been made towards the most exalted idea of socialism – the liberation of the workers from the oppressions of the past, and the recognition of their equal role in a new kind of society. But progress was halting and was broken by a series of setbacks and calamities, avoidable and unavoidable.”

“The fact that I was working against a Cold War background of western political opinion… inevitably meant my work was regarded by my critics as an apology for Soviet politics. This I took philosophically. The verdict 50 or 100 years hence, if my work is still read then, will be more interesting.”

Citation information
Title: “Historian: E. H. Carr”
Authors: Jennifer Llewellyn, Steve Thompson
Publisher: Alpha History
URL: https://alphahistory.com/russianrevolution/historian-e-h-carr/
Date published: May 3, 2019
Date accessed: June 25, 2022
Copyright: The content on this page may not be republished without our express permission. For more information on usage, please refer to our Terms of Use.