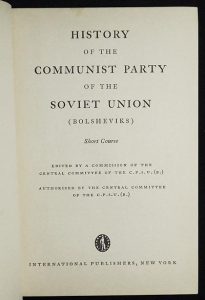 Books: The History of the Communist Party of the Soviet Union: Short Course (1938).

The CPSU Short Course history was first published in 1938. It was commissioned three years earlier by Joseph Stalin, who wanted an ‘official’ history of the Bolshevik Party, the Russian Revolution and the first years of the Soviet Union.

The authors of this state-sanctioned ‘official’ history were prominent writers or propagandists. All were Bolsheviks who had demonstrated support or praise for Stalin. Yemelyan Yaroslavsky, for example, was an effusive biographer of Vladimir Lenin, the head of a Moscow institute dedicated to Lenin’s work and the editor of a Marxist historical journal.

Stalin himself took an active interest in the creation of the CPSU history. He authored or rewrote some sections and edited others, suggesting material for deletion or inclusion.

The first edition was published in 1938 and promoted as the definitive and most accurate history of the Soviet Union. Millions of copies were sold at a very low price, subsidised by the state. In total, more than 60 million copies would be printed in more than 40 different languages.

Understandably, the CPSU Short Course presents favourable impressions of Stalin and his role in the revolution, as well as one-sided perspectives of other individuals and issues. Stalin is depicted as the natural successor to the Lenin’s leadership and the flagbearer for Marxist-Leninism. Leon Trotsky and his supporters, in contrast, are condemned as deviationists.

The text of the CPSU Short Course was amended and new editions published, as various Soviet figures fell from Stalin’s favour and were sidelined or purged.

After Stalin’s death in 1953, the CPSU Short Course history was rejected by his successor, Nikita Khrushchev. It was replaced by a new official history of the Soviet Union.

“Lenin enjoyed the warm affection of the politically advanced workers whom he taught in the circles. “Our lectures,” says the worker Babushkin recalling Lenin’s teaching activities in the workers’ circles, “were of a very lively and interesting character. We were all very pleased with these lectures and constantly admired the wisdom of our lecturer”.”

“In 1895, Lenin united all the Marxist workers’ circles in St. Petersburg (there were already about 20 of them) into a single League of Struggle for the Emancipation of the Working Class. He thus prepared the way for the founding of a revolutionary Marxist workers’ party.”

“[His] extraordinarily profound knowledge of Marx, his ability to apply Marxism to the economic and political situation of Russia at that time, his ardent and unshakeable belief in the victory of the workers’ cause and his outstanding talent as an organiser made Lenin the acknowledged leader of the St. Petersburg Marxists. Lenin enjoyed the warm affection of the politically advanced workers whom he taught in the circles.”

“In tsarist Russia, the capitalist yoke was aggravated by the yoke of tsardom. The workers not only suffered from capitalist exploitation, from inhuman toil but, in common with the whole people, suffered from a lack of all rights. The politically advanced workers, therefore, strove to lead the revolutionary movement of all the democratic elements in town and country against tsardom.”

“The Bolsheviks had marched with the workers [on ‘Bloody Sunday’ 1905]. Many of them were killed or arrested. There, in the streets running with workers’ blood, the Bolsheviks explained to the workers who it was that bore the guilt for this heinous crime and how he was to be fought.”

“The Russian bourgeoisie went to war [in 1914] with the purpose of improving its position: to seize new markets, to make huge profits on war contracts, and at the same time to crush the revolutionary movement by taking advantage of the war situation.”

“The armed people – the workers and soldiers – sent their representatives to the Soviet as to an organ of power of the people. They thought and believed that the Soviet of Workers’ and Soldiers’ Deputies would carry out all the demands of the revolutionary people, and that, in the first place, peace would be concluded. But the unwarranted trustfulness of the workers and soldiers served them in evil stead. The Socialist-Revolutionaries and Mensheviks had not the slightest intention of terminating the war, of securing peace.”

“The Bolshevik Party was the only proletarian party which remained faithful to the cause of socialism and internationalism and which organised civil war against its own imperialist government. All the other parties of the Second International, being tied to the bourgeoisie through their leaders, found themselves under the sway of imperialism and deserted to the side of the imperialists.”

“In the fight against the enemies of the working class and their agents within the working-class movement, the Party consolidated its ranks and extended its connections with the working class. Making wide use of the Duma as a platform for revolutionary agitation, and having founded a splendid mass workers’ newspaper, Pravda, the Party trained a new generation of revolutionary workers — the Pravdists. During the imperialist war, this section of the workers remained faithful to the banner of internationalism and proletarian revolution. It subsequently formed the core of the Bolshevik Party during the revolution of October 1917.”

Citation information
Title: “Historian: CPSU historians”
Authors: Jennifer Llewellyn, Steve Thompson
Publisher: Alpha History
URL: https://alphahistory.com/russianrevolution/historian-cpsu-historians/
Date published: May 5, 2019
Date accessed: January 27, 2023
Copyright: The content on this page may not be republished without our express permission. For more information on usage, please refer to our Terms of Use.