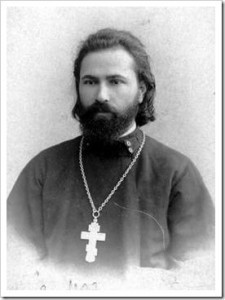 Georgy Gapon (1870-1906) was a Russian Orthodox priest and political agitator who contributed to political unrest in 1904-5. He is best known for drafting a workers’ petition and leading the ‘Bloody Sunday‘ protest in January 1905.

Gapon was born to an impoverished Cossack family in Poltava province, Ukraine. He was educated at a seminary before working as an accounting clerk in the local zemstvo. Though chiefly interested in social welfare, Gapon entered the priesthood at the behest of his wife.

Gapon relocated to St Petersburg, where he worked as a teacher and a prison chaplain while organising charitable relief for the city’s poor. This included industrial workers and their families. He was encouraged by the Okhrana to organise a zubatovshchina (state-run workers’ association) but his real loyalties were with suffering workers.

Charismatic, of striking appearance and a compelling orator, by 1904 Gapon was organising factory workers into militant sections. By January 1905, he had a significant following among the steelworkers at the Putilov plant in St Petersburg. Gapon drafted a petition to Tsar Nicholas II that called for improvements to working conditions but also political reforms.

On January 21st, the day before the ‘Bloody Sunday’ shootings, Gapon wrote the Tsar:

“Sire! Do not believe the ministers. They are cheating thee in regard to the true state of affairs. The people believe in thee. They have made up their minds to gather at the Winter Palace tomorrow to lay their needs before thee.”

Gapon’s petition was carried by protestors when they marched through St Petersburg the following day. Hundreds were gunned down by imperial troops as they approached the Winter Palace. Gapon fled the scene and evaded arrest by hiding in the home of Maxim Gorky. He later fled across the border to Finland.

While underground and in exile, Gapon condemned the violence of ‘Bloody Sunday’ and condemned the tsar for his lack of sympathy. He openly called for revolution, urging rival groups like the SRs, Mensheviks and Bolsheviks to unite to overthrow tsarism.

Gapon returned to Russia after the October Manifesto. He was killed by Pinhas Rutenberg, a member of the SRs, in March 1906, after revealing his connections with the Okhrana.

Citation information
Title: “Georgy Gapon”
Authors: Jennifer Llewellyn, Steve Thompson
Publisher: Alpha History
URL: https://alphahistory.com/russianrevolution/georgy-gapon/
Date published: March 27, 2019
Date accessed: May 20, 2022
Copyright: The content on this page may not be republished without our express permission. For more information on usage, please refer to our Terms of Use.