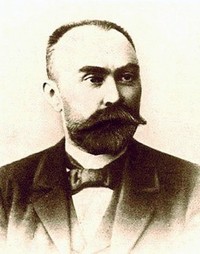 Georgi Plekhanov (1856-1918) was a prominent Russian revolutionary in the first years of the 20th century. He was one of the first political philosophers to apply Marxist theory to Russia. Dubbed the ‘Father of Russian Marxism’, Plekhanov was an important contributor to both the Social Democrats (SDs) and the Mensheviks.

Plekhanov was born in the Tambov province of Russia. The was the eldest of 12 children of a minor Tatar nobleman. He was tutored at home until the age of 10 when he entered a military academy. He later enrolled at St Petersburg college to study mining.

In his late teens, Plekhanov was drawn into revolutionary politics, joining the populist group Zemlia i Volya (‘Land and Liberty’). His involvement in this group led to Plekhanov being expelled from his studies.

Plekhanov came to the attention of the tsarist police and he fled Russia in 1880, taking refuge in Switzerland. Living in Geneva, he studied Marxism and formed the first Russian Marxist group, Osvobozhdenie Truda (‘Emancipation of Labour’). He also produced some of the most significant works in Marxist literature.

While in Geneva, Plekhanov met and worked closely with several prominent figures including Julius Martov and Vladimir Lenin. In 1900, he collaborated with them to form Iskra, a newspaper designed to coordinate and unite Russia’s disparate Marxist groups.

Plekhanov sided with Lenin at the party’s Second Congress in 1903 but he later rejected Lenin’s tactical approach. For Plekhanov, any revolution had to develop organically in the fertile inequality of industrial capitalism. Russia, in his view, was not yet at this stage and Lenin’s attempt to hasten revolution was at odds with Marxist theory.

Plekhanov supported Russia’s involvement in World War I because he saw Kaiserism as a danger for working-class movements. Plekhanov’s criticisms of Lenin intensified during the war. He argued that Lenin was a German agent and urged the Provisional Government and the Allies to take action against him.

The October Revolution saw Plekhanov flee Russia. He died in exile in Finland in May 1918, aged 61.