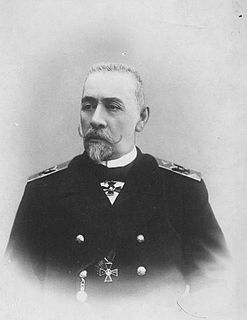 Fyodor Dubasov (1845-1912) was a Russian naval officer and tsarist official. He became a hated figure in the tsarist regime for his violent suppression of urban and peasant uprisings.

Dubasov was born near the modern-day city of Kalinin in European Russia. His family belonged to the Russian nobility and had a long history of service in the Imperial Navy. Dubasov himself joined the Navy in 1863. He graduated with an officers’ commission and by the mid-1880s was captaining cruisers.

By the outbreak of the 1905 Revolution, Dubasov was an admiral. During that year he was given command of an infantry regiment and sent into rural regions in Ukraine and Kursk, with orders to suppress peasant unrest. Reports suggest he did so thoroughly and mercilessly.

In November the same year, Dubasov was appointed governor-general of Moscow, replacing Grand Duke Sergei Alexandrovich, who had been assassinated by terrorists earlier in 1905.

This appointment was not coincidental. Moscow was by then a city gripped by unrest and insurrection, while Dubasov had a reputation for getting things done, violently if necessary. Dubasov moved armed troops and artillery into the city and ordered them to fire on large mobs, killing hundreds.

Dubasove became a hated figure among ordinary Russians. He was also a target of assassins, who almost claimed his life with a bomb attack in April 1906.

Citation information
Title: “Fyodor Dubasov”
Authors: Jennifer Llewellyn, Michael McConnell, Steve Thompson
Publisher: Alpha History
URL: https://alphahistory.com/russianrevolution/fyodor-dubasov/
Date published: May 18, 2019
Date accessed: July 07, 2022
Copyright: The content on this page may not be republished without our express permission. For more information on usage, please refer to our Terms of Use.