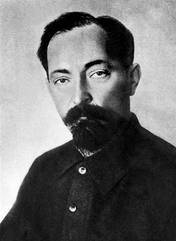 Felix Dzerzhinsky (1877-1926) was a minor aristocrat of Polish birth who oversaw the Bolshevik party’s much-feared security agencies, the Cheka and the OGPU.

Dzerzhinsky was born in Ivyanets in what is now Belarus. His family were aristocratic Poles with their own estate, his father worked as a teacher of physics and mathematics.

The young Dzerzhinsky was raised in the Catholic faith. He was educated in Wilno but his school record ranged from average to mediocre. He was expelled shortly before graduation for radical political activities.

In 1895, Dzerzhinsky joined a branch of the Lithuanian Social Democrat Party. He quickly became obsessed with Marxist theory and revolution and quit school to become a full-time revolutionary.

After producing and distributing socialist propaganda in Kovno, Dzerzhinsky was arrested, detained and sentenced to three years in exile in Siberia. He remained there a little over a year before escaping. He would spend more than half of the next 20 years in prison or compulsory exile.

Dzerzhinsky was in a tsarist prison when the February 1917 revolution erupted. He was released under the Provisional Government’s general amnesty and immediately joined the Bolshevik movement. By July 1917, Dzerzhinsky was a member of the Bolshevik Central Committee and was contributing to the planning of the October Revolution.

In December 1917, Dzerzhinsky was appointed in the role for which he is best known: the head of the Cheka. Initially a purely investigatory body with just a few dozen agents, the Cheka’s size and remit increased rapidly during early 1918. Dzerzhinsky was instrumental in its expansion and fanatical in his leadership, often spending every waking hour investigating and crushing counter-revolution.

Citation information
Title: “Felix Dzerzhinsky”
Authors: Jennifer Llewellyn, Michael McConnell, Steve Thompson
Publisher: Alpha History
URL: https://alphahistory.com/russianrevolution/felix-dzerzhinsky/
Date published: May 15, 2016
Date accessed: January 27, 2023
Copyright: The content on this page may not be republished without our express permission. For more information on usage, please refer to our Terms of Use.