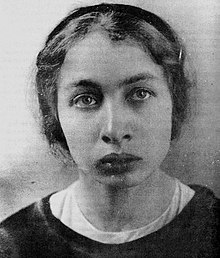 Fanya Kaplan (1890-1918) was a young Ukrainian-born radical aligned with the Socialist-Revolutionaries. She is best known for her failed attempt to murder Vladimir Lenin in August 1918. Kaplan was arrested, tortured and executed by the Cheka.

Kaplan was born Feiga Efimovna Roidman in Volhynia, Ukraine, the daughter of a Jewish teacher. She mixed with Anarchist and Socialist-Revolutionary groups from a young age, though there is no evidence she formally joined these groups.

In 1906, Kaplan was arrested in Kiev, charged with involvement in terrorism and sentenced to life in a katorga (labour camp). She spent a decade in Siberian camps and was subject to brutal punishment, including naked beatings. She went partially blind as a result of this.

Kaplan was released in 1917 after the collapse of tsarism. She supported the Bolsheviks initially but soon came to oppose Lenin. Kaplan later claimed to despise the Bolshevik closure of the Constituent Assembly (January 1918), the Treaty of Brest-Litovsk (March 1918) and the suppression of the Left SRs (July 1918). These events convinced her that Lenin had to be eradicated for the good of Russia.

On August 30th 1918, Kaplan confronted Lenin as he left an arms factory in Moscow. She fired three shots from a pistol, two of which struck the Bolshevik leader. Lenin was whisked away to the Kremlin while his would-be assassin was taken into custody.

Kaplan was interrogated and tortured by the Cheka for three days but maintained she was acting alone, refusing to implicate other SRs. The ‘Russian Corday’ was executed on September 3rd with a gunshot to the back of the head.