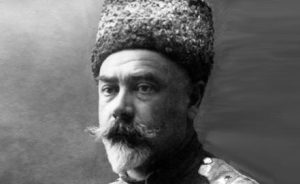 Anton Denikin (1872-1947) was a general in the tsarist Imperial Army and, later, an important White army commander during the Civil War.

Denikin was born near the Vistula River in Russian Poland, the son of a peasant who became a career soldier and ascended to the rank of major. The family suffered significant poverty after Denikin’s father’s retirement but remained dedicated to Russia, the Russian Orthodox Church and the Tsar.

Enthralled by his father’s stories of army life, Anton Denikin joined the military. He studied at a military academy in Kiev and the General Staff Academy in St Petersburg, graduating with an officer’s commission.

By the outbreak of World War I, Denikin had reached the rank of lieutenant-general. He commanded combat units on the Galician front before returning to staff appointments, serving as the chief of staff to Generals Aleksei Brusilov and Lavr Kornilov.

After the October Revolution, Denikin travelled to the Caucasus with Kornilov, where they formed a counter-revolutionary army to push the Bolsheviks out of southern Russia. Denikin assumed command of this army after Kornilov was killed by an artillery shell in April 1918.

Denikin’s armies were the worst exponents of what became known as the White Terror, a wave of destruction and mass killings against suspected Bolsheviks and their sympathisers in southern Russia. This also included numerous anti-Semitic pogroms, since Denikin and his cohort were Orthodox adherents and considered the Bolshevik Revolution to be the work of Jews.

By now defeated and exhausted, Denikin and his volunteers retreated further south to the Crimea. In April 1920, he resigned his command of the Volunteer Army and fled Russia, sailing to London via Turkey. He spent the last 30 years of his life in exile in various European countries, living as a writer and documenting the history of the Russian military and the Civil War.

Denikin relocated to the United States in 1945. He died there two years later.