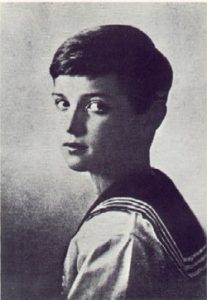 Alexei Romanov (1904-1918) was the only son of Nicholas II and Alexandra and the Tsarevich (heir apparent) to the Russian throne. The young prince suffered from haemophilia, a genetic blood disorder that led to his mother seeking the counsel of Grigori Rasputin.

Alexei Nikolaevich Romanov was born in the Peterhof Palace in St Petersburg in August 1904. He was the fifth child and only son of the Tsar and Tsarina, who were both overjoyed with the arrival of a male heir.

The young tsarevich’s condition became obvious in the weeks after his birth, due to sustained bleeding from his navel. He was diagnosed by the royal physician, Dr Botkin, who had treated haemophiliac cases before.

Alexei’s condition was not publicly disclosed but was widely known by palace staff. During his childhood, every effort was made to protect the Tsarevich from injuries, cuts and bruises. His living areas were padded extensively while two Russian sailors were assigned to the prince to prevent knocks and falls.

In the autumn of 1912, the eight-year-old prince suffered a severe bruise after knocking his thigh in a boat. Within a month, Alexei’s condition had worsened to the point where he was given the last rites of the Russian Orthodox Church. This episode led to an increase in Rasputin’s interaction with the royal family.

Alexei was shot by Bolshevik agents in Ekaterinburg, three weeks before his 14th birthday.