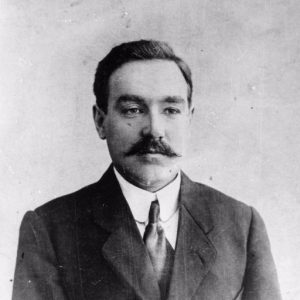 Alexander Shlyapnikov (1885-1937) was a socialist revolutionary and the most prominent spokesperson for the Workers’ Opposition, the anti-statist Bolshevik faction that emerged in 1920.

Shlyapnikov was born to an impoverished family in Vladimir province, east of Moscow. His father drowned when Shlyapnikov was young, leaving his mother to support their family.

Shlyapnikov joined the Bolsheviks in 1903. In 1905, he was briefly imprisoned after organising a protest in response to ‘Bloody Sunday‘. He was re-arrested later in 1905 for his involvement in the St Petersburg Soviet and sent to prison for two years.

Shlyapnikov was more moderate than Vladimir Lenin. He did not support either the October Revolution or the exclusion of Mensheviks and Socialist-Revolutionaries from the Soviet government. Despite these objections, he accepted the post of Commissar of Labour in Lenin’s first government.

As time passed, Shlyapnikov became more critical of Lenin’s policies and methods. Along with Alexandra Kollontai, he appeared at the head of what became known as the Workers’ Opposition. This group called for greater union involvement in policy formulation and the winding back of Soviet bureaucracy.

In 1922, Lenin called for Shlyapnikov’s expulsion from the party but failed to achieve it. The 10th Congress banned factionalism, however, effectively outlawing the Workers’ Opposition and stifling Shlyapnikov’s criticisms.

Shlyapnikov was marginalised during the 1920s and, in 1930, forced to issue a list of his “political errors”. He was arrested during the Stalinist purges, given a show trial and executed in September 1937.