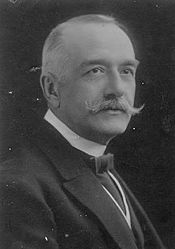 Alexander Protopopov (1866-1918) was a conservative politician, a deputy in the third and fourth Dumas and Russia’s interior minister at the time of the February Revolution. He was later executed by the Bolsheviks.

Like Vladimir Lenin and Alexander Kerensky, Protopopov was born in Simbirsk (later Ulyanovsk). He was the son of a wealthy nobleman with large landholdings and industrial interests. The young Protopopov completed military training and served as a cavalry officer before leaving the Imperial Army to study law.

In 1912, Protopopov was elected to the third State Duma as a member of the Octobrist party. He acquired a reputation as being politically conservative but pragmatic and willing to embrace liberal reforms, provided they were careful and considered. Because of this, he was popular for a time.

Protopopov’s liberalism was not to last, however. The war seemed to push him to the right and by 1916, he had become a member of Tsar Nicholas II‘s inner circle, a favourite of Alexandra and a friend of Grigori Rasputin. These connections led to Protopopov’s appointment as minister of the interior in September 1916.

By early 1917, the once-popular Protopopov had become a figure of derision, a Kerensky-like figure who had ‘sold out’ a stake in the revolution for the favours of tsarism. In January 1917, he further outraged workers by ordering Cossack troops into Moscow to arrest the ringleaders of a general strike.

Protopopov contributed to the February Revolution by ignoring warnings about the unreliability of the Petrograd Garrison. During negotiations with revolutionaries, he also refused to submit the resignation of the Imperial Cabinet.

Protopopov was arrested after the February Revolution and detained in the Peter and Paul Fortress. He was executed by the Bolsheviks in September 1918, apparently in retaliation for the assassination attempt on Lenin.

Citation information
Title: “Alexander Protopopov”
Authors: Jennifer Llewellyn, Steve Thompson
Publisher: Alpha History
URL: https://alphahistory.com/russianrevolution/alexander-protopopov/
Date published: May 21, 2019
Date accessed: July 03, 2022
Copyright: The content on this page may not be republished without our express permission. For more information on usage, please refer to our Terms of Use.