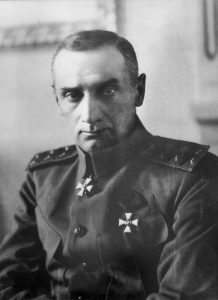 Alexander Kolchak (1874-1920) served as an admiral in the Imperial Navy. He became an important White army commander during the Russian Civil War, declaring himself supreme commander of all non-Bolshevik Russia in November 1918. Kolchak was unable to unite the disparate White forces, however, due to his brutal methods and unwillingness to tolerate other political groups.

Kolchak was born in St Petersburg, the son of a retired naval officer from a noble background. He was educated at St Petersburg’s Lyceum before joining the navy’s cadet corps, intent on becoming a career officer like his father.

Kolchak graduated with an officer’s commission in 1894. In 1900, he participated in two expeditions to the Arctic Circle. The hardships endured in these polar expeditions left Kolchak with rheumatism and occasional poor health for much of his life.

In 1904-5, Kolchak saw combat in the Russo-Japanese War, commanding his own destroyer with some distinction. He was captured during the battle for Port Arthur and released by the Japanese in 1905. During World War I, Kolchak was promoted to vice-admiral given command of the Black Sea fleet.

Kolchak supported the February Revolution and the Provisional Government but he opposed the government’s military reforms, believing they weakened discipline and structure.

In the spring of 1917, Kolchak was urged by conservative elites to seize control of the government, rule as a quasi-dictator and crush the Bolsheviks and the Petrograd Soviet. When Alexander Kerensky became aware of these plots, Kolchak resigned his commission and embarked on a study tour of the United States.

Kolchak was greatly admired by the British and French, who viewed him as the Russian most capable of uniting the disjointed White armies. At their urging, Kolchak returned to Russia after the October Revolution to lead the struggle against the Bolsheviks.

On his arrival, Kolchak became a member of cabinet in the counter-revolutionary government based in Omsk. In November 1918, he became its supreme leader following a coup d’etat carried out by Cossack officers and backed by the British. His first move was to replace the Provisional All-Russian Government with a military dictatorship.

Kolchak’s domestic policies included a crackdown on soviets, the persecution of socialists and rival factions, the acknowledgement of foreign debts and the return of private property such as land and factories. In return, the Allies provided Kolchak’s regime with vast amounts of food and military supplies.

Under Kolchak’s leadership, the White forces achieved some notable military gains, particularly in the first months of 1919. These gains were reversed in the middle of the year, however, as the Red Army reorganised and opposition to Kolchak increased.

In January 1920, Kolchak was betrayed by Czech officers while travelling to British headquarters in Irkutsk. He was arrested and handed to a Left SR contingent. Within a fortnight, Kolchak had been sentenced to death. He was executed by firing squad and his body dumped in a frozen river.

Citation information
Title: “Alexander Kolchak”
Authors: Jennifer Llewellyn, Steve Thompson
Publisher: Alpha History
URL: https://alphahistory.com/russianrevolution/alexander-kolchak/
Date published: May 1, 2019
Date accessed: May 03, 2022
Copyright: The content on this page may not be republished without our express permission. For more information on usage, please refer to our Terms of Use.