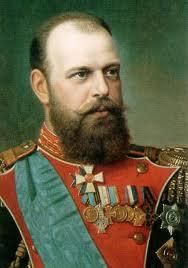 Alexander III (1845-1894) was the father of Nicholas II and the second-last Romanov tsar of Russia. His reign was one of conservative reaction and the repression of revolutionary and reform groups.

Alexander Alexandrovich Romanov was born in the Winter Palace in St Petersburg, the second son of Tsar Alexander II. During his childhood, Alexander was tutored by Konstantin Pobedonostsev, whose lessons instilled him the young prince with both religious piety and political conservatism.

Alexander became the Tsarevitch of Russia in 1865 following the death of his brother, Nicholas, from meningitis. At Nicholas’ request, Alexander married his late brother’s fiancée, Dagmar, a Danish princess. Their marriage was a happy one with no known infidelity. It yielded six children including the future Nicholas II.

The reign of Alexander III began with the assassination of Alexander II in March 1881. The new tsar was horrified by the murder of his father but not altogether surprised. He had long viewed the reforms of the mid-19th century as too liberal and permissive. The growth of violent revolutionary and anarchist groups was an inevitable byproduct of these reforms.

Shortly after becoming Tsar, Alexander III issued a statement asserting his belief in “unshakable autocracy”. In this, he asserted his commitment to maintaining tsarist autocracy and the supremacy of the Orthodox church. Alexander’s decision-making was supported by his old tutor Pobedonoststev, who continued to provide him with advice during his reign.

Most of his 13-year-rule was spent seeking to strengthen autocracy. The Okhrana (tsarist secret police) was formed, while government officials were given extensive powers to arrest and exile political dissidents. Russian language, culture and religion were imposed on peoples across the empire (‘Russification’). The exclusion and persecution of Russia’s Jews escalated, leading to numerous pogroms in the 1880s. Alongside these repressions were economic policies that encouraged the construction of railways and heavy industries.

Alexander died suddenly from a stroke in November 1894. The crown passed to his son, Nicholas, who Alexander had privately expressed was unsuited for leadership.