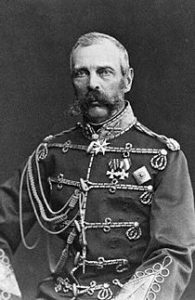 Alexander II (1818-1881) was the Tsar of Russia between 1855 and 1881, the father of Alexander III and the grandfather of Nicholas II. His rule was one of measured reform, most significantly the emancipation of serfdom in 1861. Despite this, Alexander was assassinated by revolutionaries in St Petersburg in March 1881.

Alexander was born in the Kremlin in Moscow in April 1818. He was the eldest son of Nicholas I, who became tsar during the Decembrist Revolt and battled war and disorder during his 30-year reign.

As tsarevich, Alexander received a liberal education and travelled widely across Russia and Europe. He came to admire the industrial progress and social freedoms in countries like Britain. Defeat in the Crimean War only reinforced Alexander’s view that some of this modernisation was needed in Russia.

Alexander became tsar in March 1855, shortly before his 37th birthday. He implemented a series of policies dubbed the Great Reforms, which included the creation of provincial assemblies called zemtsvos and changes to the military and judiciary.

The new tsar’s most notable reform, however, was the emancipation of the serfs. Russia’s peasantry had for generations been legally bound to the land, the virtual property of powerful nobles and landowners. Alexander’s Emancipation Edict (February 1861) gave more than 23 million people freedom from landed bondage.

While Alexander’s emancipation of the serfs was welcomed in many circles, its implementation was complicated and problematic and many peasants found themselves no better off. The failures of emancipation fuelled a revolutionary group called Narodnaya Volya (‘People’s Will’) and an attempt on Alexander’s life in 1866.

Alexander continued his reform program after this but these were accompanied by the appointment of conservatives in the ministry and bureaucracy, crackdowns on political dissidents and restrictions on liberal curricula in Russia’s universities.

The Tsar survived another attempt on his life in February 1880 when the Narodnaya Volya bombed a dining room in the Winter Palace, killing 11 people.

The group made another assassination attempt in March 1881, this time with greater success. Mortally wounded by a bomb, Alexander II was carried by sledge by the Winter Palace, where he was attended by members of his family and given the last rites of the church.