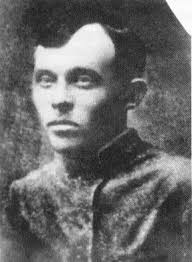 Alexander Antonov (1888-1922) was the main leader of the peasant uprising that broke out in the Tambov in the early 1920s.

Alexander Stephanovich Antonov was born in Moscow but raised in the village of Kirsanov in Tambov. He attended the local institute but was expelled for political radicalism.

At 16, Antonov began an apprenticeship repairing railway stock. Around this time, he also joined the Socialist Revolutionaries (SRs). It is unclear whether Antonov was drawn to the party’s ideology and policies or the violent activities of its radical wing.

Antonov engaged in acts of extortion and terrorism for the SRs. He was arrested and detained in a labour camp until the post-February Revolution amnesty.

Antonov left the SRs and returned to his native Tambov, where he held several local government positions, including the commander of the local militia.

When the Bolshevik regime increased grain requisition levels by 50 per cent, coupled with acts of brutality against local peasants, it triggered what became known as the Tambov Rebellion. Antonov appeared at the head of this rebellion and its political body, the Union of Working Peasants.

The leadership of the already popular Antonov helped the movement grow significantly. By early 1921, the rebellion had attracted an army numbering more than 60,000 volunteers.

The spread of the Tambov Rebellion caused concern for the Bolshevik regime, which deployed Red Army troops to the region and even authorised the use of concentration camps and chemical weapons. The rebellion was eventually suppressed by the summer of 1921.

Alexander Antonov was eventually tracked down and killed in a gunfight with Red Army and Cheka units near the Vorona River.