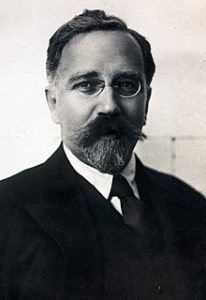 Adolf Joffe (1883-1927) was a communist revolutionary, diplomat and politician who was closely aligned with Leon Trotsky.

Joffe was born in Simferopol, the son of a wealthy Jewish businessman. He received a privileged education but became interested in Marxism while still at high school.

Joffe joined the Social Democrats (SDs) in 1903, shortly before his 20th birthday, and immediately aligned himself with the Mensheviks. He combined his interest in Marxist politics with studies of medicine.

After a period in exile, Joffe returned to Russia to participate in the 1905 Revolution. He fled again during the Stolypin-ordered repressions of 1905-6 but continued his revolutionary activities, often drawing on his family’s wealth to do so.

Joffe met Trotsky in 1908 and was greatly impressed by his intellect and charisma. The pair began a close collaboration that included co-editing Pravda. They were later divided by several years of exile but rejoined in mid-1917 to join the Bolshevik faction.

By August 1917, Joffe had been elected to the Bolshevik Central Committee. He supported Lenin’s call for a socialist revolution in October 1917 and became chairman of the Petrograd Military Revolutionary Committee.

Joffe later headed the Bolshevik delegation sent to negotiate with the Germans at Brest-Litovsk. As in most things, Joffe sided with or deferred to Trotsky with regard to a peace treaty. He opposed signing the treaty that was eventually concluded.

Joffe was sidelined from positions of party leadership in 1919 and instead given diplomatic roles abroad. He served in Ukraine and negotiated ceasefires or treaties with Poland and the Baltic States. In the early 1920s, he played an important role in the Chinese Revolution by travelling to China to furnish aid to the Guomindang nationalist resistance.

Adolf Joffe committed suicide in November 1927, in part due to his chronic ill health and in part to the expulsion of Trotsky just four days earlier. His wife, Maria, a Bolshevik journalist, also spoke out against Trotsky’s expulsion. As a consequence, she spent most of the next 30 years in Stalinist labour camps.