William Prynne (1600-1669) was an English lawyer and writer, famous for his provocative and controversial essays. One of the most Puritan of the Puritans, Prynne was not afraid to take aim at popular conventions, culture or leaders. One of his earliest and best-known works was Histriomastix, a 1633 attack on just about anything considered fun. Historiomastix strongly criticised parties, masquerade balls, country fairs, mixed dancing, feast days, wakes, sports, even hairstyles and colourful stained-glass windows. But much of this particular text is a condemnation of theatrical performances and those responsible for them. Plays, Prynne claims are “the chief delight of the Devil”, wanton and immoral displays of debauchery filled with:

As to those who regularly attend the theatre, they are:

Histriomastix was especially severe on actors and actresses. The ranks of male actors, Prynne claimed, were filled with “Sodomites” who spent their time writing love letters and “chasing the tails” of “players boys”. As for actors of the opposite gender, Prynne offered a simple but biting four-word assessment:

This anti-thespian tirade soon got William Prynne into trouble. One woman who quite enjoyed masked balls, mixed dancing and the occasional acting role was Henrietta Maria, wife of Charles I. The queen, who appeared in a speaking role in a prominent play not long after the publication of Histriomastix, took his slurs personally. In 1634 Prynne was hauled before the star chamber, charged with seditious libel against the queen and others and found guilty. He was fined £5000, stripped of his academic degrees, given two days in the pillory and sentenced to have the tops of his ears clipped off with shears. And if that wasn’t enough, hundreds of copies of Histriomastix were rounded up and burned before Prynne’s eyes while he languished in the pillory.

Source: William Prynne, Histriomastix, London, 1633. Content on this page is © Alpha History 2016. Content may not be republished without our express permission. For more information please refer to our Terms of Use or contact Alpha History.

In 1913, a Minnesota newspaper reported that a young lady had been arrested, jailed then sent to an insane asylum – for wearing a slit skirt that showed too much leg: 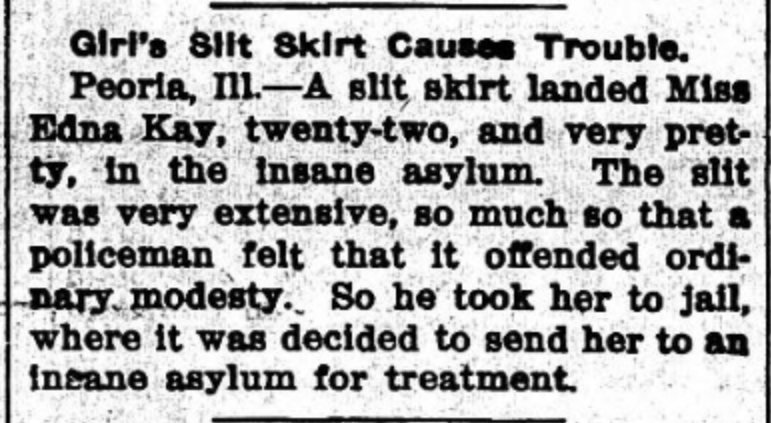 Source: The Warren Sheaf (Minnesota), October 15th 1913. Content on this page is © Alpha History 2016. Content may not be republished without our express permission. For more information please refer to our Terms of Use or contact Alpha History.

In August 1921 police in Long Beach, New York, cracked down on people driving about in bare knees. Captain Walter Barruscale told a local newspaper that his officers had issued several fines, ranging in amounts of $10 to $25, to motorists entering Long Beach with their knees exposed:

“‘Long Beach will not countenance people coming here in automobiles and wearing bathing costumes, or without their limbs being properly covered below the knees’, Capt. Barruscale said.”

Barrascule said that the same rules applied to those who “go about the streets… bare knees must be confined within walls or restricted to the bathing beaches”. Signs have been erected on roads into Long Beach, warning motorists of the restrictions and possible penalties.

Source: The Evening World, New York, August 22nd 1921. Content on this page is © Alpha History 2016. Content may not be republished without our express permission. For more information please refer to our Terms of Use or contact Alpha History.

In November 1891, William Flower, a Swansea picture framer, appeared before a local magistrate charged with:

“…wilfully exposing in his window, or other part of his shop, certain obscene pictures… suggestive of love-making on the part of the Roman Catholic priesthood”.

Flowers pleaded not guilty but was convicted and fined 40 shillings plus costs. A press report of the case described the drawings or cartoons displayed in Flower’s shop and later deemed obscene by the court:

“One represents a priest ear-holding a man, who has pushed aside a curtain and is rapturously gazing at a buxom servant tying her garter. In the companion picture… the same healthy-looking priest has his arm around the generous waist of the maid… All the figures are decently dressed and neither can anything be found of a suggestive character.”

Further investigations by the press revealed that a Catholic clergyman, Canon Richards, had noticed the cartoons on his daily walk. He immediately reported them to the police and pushed for charges to be laid. Flower said he intended to appeal the conviction and had received donations from locals to help meet his costs.

Source: The Western Mail, Cardiff, November 18th 1891. Content on this page is © Alpha History 2016. Content may not be republished without our express permission. For more information please refer to our Terms of Use or contact Alpha History.

In the late 19th century the United States was gripped by anti-masturbation hysteria. Fuelled by the writings of Tissot, Kellogg and others, scores of American physicians warned that “self pollution” was an avenue to physical infirmity, mental illness and even death. This hysteria gave rise to numerous cures and treatments – as well as several inventions. Between 1856 and 1918 the United States Patent and Trademark Office approved 35 patent applications for anti-masturbatory devices. As might be anticipated, the majority of these were intended for male use. Several were based on the chastity belt principle, encasing the genitals or hands and rendering them untouchable. A lockable belt and apron device, designed by Thomas Thomas (1907, patent 852638), prevented the wearer from sleeping on his or her back and touching their groin. Henry A. Wood (1910, patent 973330) submitted a patent for ‘night mittens’ that prevented any dextrous use of the hands and fingers. There were also three patented alarm systems, designed to wake the wearer or the parents in the event of an erection.

Perhaps the most elaborate patent was granted to Frank Orth (1893, patent 494437). Orth’s device connected a pair of rubber underpants, an electric pump and a water cistern. In the event of arousal or self manipulation, this machine pumped cold water around the genitals to lower their temperature. The most bizarre contraptions, however, used pain and discomfort as a disincentive to arousal or self pleasure. Albert V. Todd (1903, patent 742814) submitted two designs: one delivered a mild electrical shock to the erectile penis, the other employed a series of spikes. Harry F. Bowen’s machine (1918, patent 1266393) also delivered electric shocks. More simple in its design was a “surgical appliance” suggested by James H. Bowen (1889, patent 397106). Bowen’s device consisted of a lockable metal penis cap connected to small cables that were clamped to strands of pubic hair. In the event of an erection the cables would stretch taut and pull the pubic hair, causing the wearer considerable pain.

Source: US Patent and Trademark Office database, patent numbers as listed. Content on this page is © Alpha History 2016. Content may not be republished without our express permission. For more information please refer to our Terms of Use or contact Alpha History.