In late 1633, the Anglican archdeaconry in Oxford ordered an investigation into an incident in Great Tew. According to informants a male servant, Thomas Salmon, committed an “outrage to decency” by entering the bedroom of a Mrs Rymel, just six hours after she had given birth. Salmon had gained access to the room by wearing women’s clothing.

Several persons were ordered before an archdeacon’s court, including the attending midwife, Francis Fletcher. She testified that:

“Thomas Salmon, a servant, did come to the labour of the said Rymel’s wife… disguised in women’s apparel… she confesseth he did come into her chamber some six hours after she had been delivered so disguised, but she sayeth at his first coming that she knew him not… and was no way privy to his coming or to his disguise.”

Testimony from other witnesses revealed that Salmon was a young servant employed by Elizabeth Fletcher, daughter-in-law of the midwife. According to Salmon’s own testimony, his mistress had encouraged him to cross-dress and attend Mrs Rymel’s lying-in, suggesting there would be food, drinking and “good cheer”. After outfitting him in women’s clothing, Fletcher took him to the Rymel house and told other women he was “Mrs Garrett’s maid”.

Salmon admitted staying only briefly in Mrs Rymel’s bedroom, though he remained in women’s clothes for another two hours. His testimony was confirmed by Elizabeth Fletcher, who admitted helping Salmon enter the room as “a jest”. The archdeacon’s court absolved the midwife of any blame, ordered Elizabeth Fletcher to apologise and handed Salmon a strong talking-to and a formal penance.

Source: Oxford Archdeaconry Archives, 1633, fol.75, 151. Content on this page is © Alpha History 2016. Content may not be republished without our express permission. For more information please refer to our Terms of Use or contact Alpha History.

Ambroise Pare was arguably the most famous barber-surgeon of the 16th century. Pare served as a medical advisor to several French kings and once saved the life of a military officer who had been run through 12 times with a sword. In Pare’s Oeuvres, a collection of surgical memoirs written near the end of his life, he recalled a strange case from the early 16th century.

According to Pare, a woman near Blois had delivered a baby with the “face of a frog”. In 1517, the family was visited by a military surgeon, who examined the child and asked how it came to be deformed. According to the child’s father:

“His wife had a fever… in order to cure it, one of her neighbours advised her to take a live frog in her hand and hold it until it died. That night she went to bed with her husband, still holding the frog in her hand… They copulated and she conceived, and through the influence of her imagination [she now] has this monster that you have seen.”

Pare’s writings contain another incident involving frogs. In 1551 Pare was consulted by a mentally disturbed man who was convinced his insides were inhabited by frogs, which were “leaping about” in his stomach and intestines. Pare issued the patient with a strong laxative, resulting in “urgent emissions” from his bowels – and then secretly slipped some small live frogs “into his close stool”. The patient, apparently satisfied that the frogs were discharged, left feeling much better.

Source: Ambroise Pare, Les Oeuvres d’Ambroise Pare, 1664 edition. Content on this page is © Alpha History 2016. Content may not be republished without our express permission. For more information please refer to our Terms of Use or contact Alpha History. 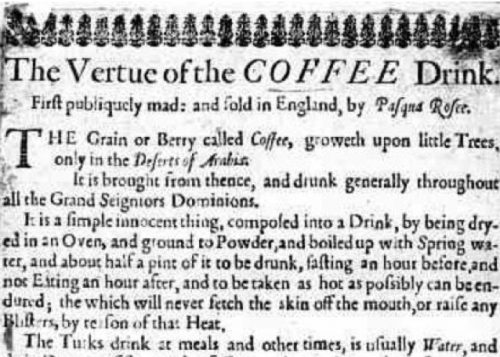 In 1652 Pasqua Rosee, a London coffee house, published what is probably history’s first advertisement for coffee. According to the Rosee’s handbill, coffee is best taken in the mid-afternoon. The user should also avoid food for an hour before and after. It should be drunk in half-pint servings, “as hot as can possibly be endured” without “fetching the skin off the mouth or raising any blisters”.

Among the claims made about the medicinal qualities of coffee:

“It forecloses the orifice of the stomach.. it is very good to help digestion… it quickens the spirits and makes the heart lightsome. It is good against sore eyes… good against the headache… deflexion of rheumas… consumptions and cough of the lungs. It is excellent to prevent and cure the dropsy, gout, and scurvy… It is very good to prevent miscarryings in child-bearing women. It is a most excellent remedy against the spleen, hypochondriac winds or the like. It will prevent drowsiness and make one fit for business… for it will hinder sleep for three or four hours.

Source: Pasqua Rosee handbill, Cornhill, 1652. Content on this page is © Alpha History 2016. Content may not be republished without our express permission. For more information please refer to our Terms of Use or contact Alpha History.

Anna Mullern was born in Swabia in 1626 and married late, probably in her 30s. Anna and her husband wanted children but for many years were unable to conceive. In 1674, when Anna was 48, she “declared herself to be with child”, having shown “all the usual tokens of pregnancy”. Anna experienced some swelling but when the symptoms abated after a few weeks, her doctor declared it a false alarm.

This ‘pregnancy’ was later forgotten when Anna conceived and delivered two healthy children, a son and a daughter. Her husband died soon after but Anna remained in excellent health, bringing up her children alone and living to the ripe old age of 94.

In March 1720, as Anna lay dying, she made an unusual request of her physician, Dr Wohnliche. Convinced that she had conceived a child in 1674 and that it remained trapped inside her, Anna requested her body be “cut open” after death. A Dr Steigertahl performed the requested autopsy – and quickly located the petrified body of Anna’s stillborn child from 46 years before:

“Her body was opened by the surgeon… he found within her a hard mass of the form and size of a large ninepin bowl, but had not the precaution to observe whether it lay in the uterus or without it… For want of a better instrument [he] broke it open with the blow of a hatchet. This ball, with the contents of it, are expressed in the following figures [see image, above].”

Source: Dr Steigertahl, “An Account of a Foetus that continued 46 years in the mother’s body” in Philosophical Transactions, vol. 31, 1721. Content on this page is © Alpha History 2016. Content may not be republished without our express permission. For more information please refer to our Terms of Use or contact Alpha History.

In January 1860, Sarah Sadler of Wollongong, Australia was arrested and charged with infanticide. According to the police brief, witnesses observed Sadler entering a paddock on the morning of January 18th and leaving it that afternoon, reportedly in a weak and distressed state.

This information was communicated to the local constable, who the following day carried out an inspection of the paddock. There he found a newborn baby, naked on the ground under a tree and atop a nest of large ants. The child, whose gender was not recorded, was unconscious and covered “head to toe” with ants. It briefly regained consciousness while being bathed but expired later that afternoon:

“We had an opportunity of examining the body of the deceased infant and it presented one of the most affecting spectacles we ever beheld. It had every appearance of being not only a healthy but an extraordinarily strong child, perfect in symmetry and strong of limb. The whole side of its right thigh and foreleg, the foreleg of the left leg, its right side, its face and forehead and the right ear were perforated with holes eaten by the ants.”

A doctor examined Sadler and her home and testified that a birth had likely taken place. Another witness swore he saw the defendant acting “like a madwoman” on the date in question.

The trial judge instructed jury members to return a guilty verdict only if they could be certain of the defendant’s sanity. Unable to do so, the jury found her not guilty of murder. Sadler’s subsequent fate is not recorded.

Sources: Illawarra Mercury (Wollongong) February 17th 1860; North Wales Chronicle, April 21st 1860. Content on this page is © Alpha History 2016. Content may not be republished without our express permission. For more information please refer to our Terms of Use or contact Alpha History.